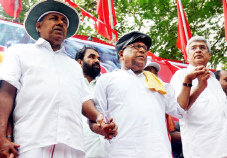 In protest mode: CPI(M) leaders Pinarayi Vijayan, V.S. Achuthanandan and Prakash Karat form links at the Raj Bhavan end of a ‘human chain’ forged by the party on Friday in protest against the Indo-ASEAN Free Trade Agreement. (Photo: C. Ratheesh Kumar for The Hindu)

CPM forms human chain in Kerala over FTA with ASEAN

CPM chooses a unique way to express its reservation over Free Trade Agreement with ASEAN in Kerala. The party activists formed a 550 km human chain on a rainy Friday evening to register their protest against the pact scheduled to be effective from January, 2010.

The party lamented that free trade pact would have adverse impact over State’s economy in a long run.

A large number of party workers including men, women, children and carder participated in the human chain formed from Kasargod to Thiruvananthapuram for pressurizing the government to scrap FTA in the larger interests of the state. 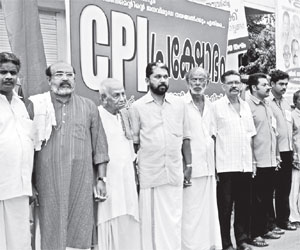 Chief Minister V.S. Achuthanandan alleged that center has been doing step-motherly treatment with the state and despite its efforts to convince the Centre about adverse impact of FTA on state’s agriculture, fishery and traditional industry, the center failed to pay heed to its genuine demands. CPI (M) State secretary Pinarayi Vijayan called to boycott the imported products in Kerala.

The party has had a good opportunity to show strength after licking dust in the recent general elections.