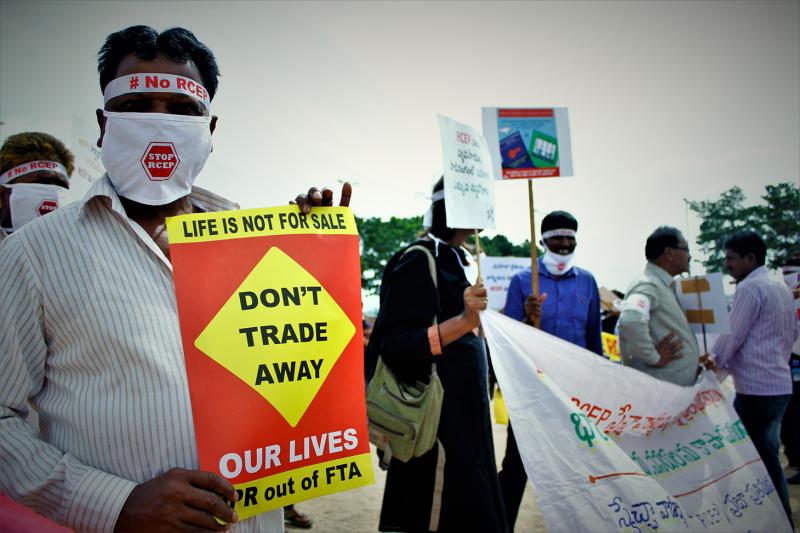 Photograph by Siddarth Singh from www.msfaccess.org

The Regional Economic Partnership Agreement (RCEP) is a mega regional trade agreement signed by fifteen countries on 15 November 2020 after 8 years of negotiation. Signatories include the ten members of the Association of South East Asian Nations (ASEAN) plus China, New Zealand, Japan, South Korea and Australia. India was a negotiating party until it withdrew from the negotiations in November 2019. The RCEP negotiations were initially framed as focused on the needs of low income countries. Public health concerns emerged however when draft negotiating chapters were leaked online, revealing pressures on countries to agree to intellectual property and investment measures that could exacerbate issues of access to medicines and seeds, and protecting regulatory space for public health. A concerted Asia Pacific civil society campaign emerged in response to these concerns, and in 2019, media and government reporting suggested that several of these measures had been taken off the table, which was subsequently confirmed in the release of the signed text in November 2020.

This paper examines civil society and health actors’ views of the conditions that successfully contributed to the removal of these measures in RCEP, with a focus on intellectual property and access to medicines. Drawing on twenty semi-structured qualitative interviews with civil society, government and legal and health experts from nine countries participating in the RCEP negotiations, the paper reports a matrix of ten conditions related to actor power, ideas, political context and specific health issues that appeared to support prioritisation of some public health concerns in the RCEP negotiations.