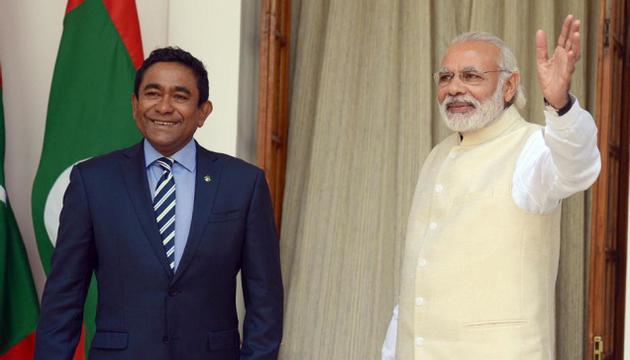 “This is part of an effort to increase the visibility in bilateral ties,” Maldives’ High Commissioner to India Ahmed Mohamed told The Hindu.

“While there is no specific agenda for the visit, we expect close bilateral consultations,” he said adding that there would be discussions on the MoUs that were signed during President Abdulla Yameen’s visit to Delhi in April 2016.

Mr. Asim’s visit is the first high-level visit between the two countries in nearly a year, since Minister of State for External Affairs M.J. Akbar visited in February 2017, and the first since the Maldives and China signed a Free Trade Agreement (FTA) in November 2017.

Shortly thereafter, India had indicated its displeasure at the speed with which the FTA was passed in the Maldivian parliament, followed by President Yameen’s state visit to Beijing. “It is our expectation that as a close and friendly neighbour, Maldives will be sensitive to our concerns, in keeping with its India First policy,” External Affairs Ministry spokesperson Raveesh Kumar had said at the time.

Mr. Asim will also officiate as President Yameen’s special envoy, according to the Ministry, raising speculation that he would formally invite Prime Minister Narendra Modi to the Maldives.

Male is the only SAARC capital Mr. Modi has not visited since he took office, having cancelled a planned visit in March 2015 over the Yameen government’s crackdown on political protests, putting a strain on bilateral ties.

Meanwhile, an official invitation last year by New Delhi to former President Mohammed Nasheed, who faces a jail term in the Maldives, had further widened the perceived rift.

However, High Commissioner Mohamed declined to comment on whether Mr. Modi was likely to travel to the Maldives in the near future. He also denied reports of any strain in ties, saying that other bilateral engagements continued, including consular talks between the two countries in October last year. Counter-terrorism exercises between armed forces called “EKUVERIN” had been held in Karnataka in December.

On the issue of the Free Trade Agreement negotiations, Mr. Mohamed admitted that “no serious negotiations” had taken place between India and the Maldives yet, but that his government “would like to have an FTA in place” at the earliest.

The FTA was only one of a series of issues between New Delhi and the Maldives in the past few months, however. In December, the Yameen government passed strictures against local councillors, who met High Commissioner of India Akhilesh Mishra, and restricted local officials from meeting diplomats.

An editorial in a government-friendly newspaper, the Vaguthu, criticising the Modi government’s “pro-Hindutva” policies had also caused concern in New Delhi. The editorial, which was condemned by the Opposition, was subsequently withdrawn, but Mr. Nasheed had also alleged that President Yameen’s actions were spoiling ties with India.

“President Yameen’s reckless foreign policy is destroying our relationship with India. The Maldives must be sensitive to India’s security and safety,” he said in a tweet last month.