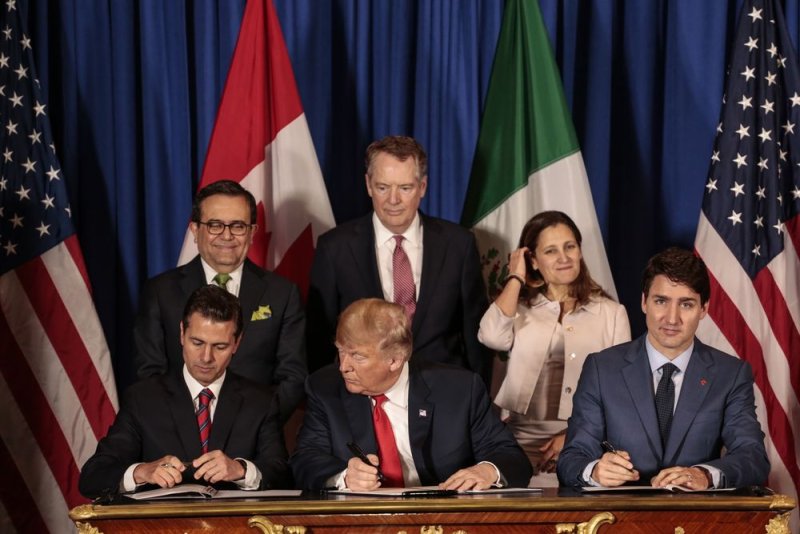 Democrats to meet with US trade representative over USMCA

Democratic Reps. Rosa DeLauro of Connecticut and Jan Schakowsky of Illinois, both included in the nine-member Democratic working group tasked with negotiating the rebranded US-Mexico-Canada Agreement with the Trump administration, reiterated their demand on Tuesday afternoon that substantive changes to the deal must be made to the underlying agreement. It’s an idea administration officials have rejected.

Making fundamental changes to the trade deal would require the White House to reopen negotiations with Canada and Mexico — and the Mexican government, which has already ratified the deal, would have to approve the revised version all over again.

"The USTR has understood that we need to look at these areas in terms of the underlying agreement," DeLauro said at a press conference about the deal. "The implementing language or side deals are not sufficient, and they will be rejected."

Schakowsky agreed: "We have to have absolute assurance that this is going to be done. The best way would be to amend the agreement," she told CNN.

Their comments did not indicate much room for compromise on the issue ahead of the Democratic working group’s first meeting with US Trade Representative Robert Lighthizer set for later Tuesday. But DeLauro said she still believes a solution can be reached, citing Democrats’ amiable relationship with Lighthizer, whom she said "has been singularly open to ideas and conversations and trying to move the ball forward."

During two appearances before Congress last week, Lighthizer signaled a willingness to work with Democrats and to make changes regarding their primary concerns for the rebranded USMCA: drug pricing and enforcement of new labor and environmental protections.

Tuesday’s meeting is likely to center around drug pricing. Democrats take issue with the USMCA’s protections for pharmaceutical companies, as it would codify intellectual property rules that would block cheaper biologics alternatives for 10 years.

"We want to start there," Schakowsky, who is leading the drug pricing aspect of talks alongside Rep. Earl Blumenauer, told CNN. "We think that may be the easiest."

Last week, Lighthizer told Rep. Lloyd Doggett, who is deeply involved in congressional efforts to reduce drug prices, that he believes he can "satisfy you and other members" on the issue.

"I’m not on the other side," he told Democrats on the House Ways and Means Committee. "I’m on the same side."

Lighthizer also said he would be able to solve Democrats’ other concerns in half a day if he took time to sit down with members and work through the details. "Members know what they want," he said. "It’s a question of sitting down and figuring out what needs to be done."

But if the talks are not productive, the White House will be able to proceed with its own legislation as soon as next week. Such a move would be seen as pressuring Democrats with the deadlines set by fast track, the expedited process for congressional consideration of trade deals established by Trade Promotion Authority.

Democrats have repeatedly warned Lighthizer against introducing implementing legislation before talks between lawmakers and the administration are complete.

"I worry the President is going to try to jam us with an implementing bill the first chance he gets," Rep. Bill Pascrell said in last week’s hearing. The New Jersey Democrat asked Lighthizer to promise he would meet with the committee again before he sends the bill to Congress, in order to avoid being blindsided by the legislation.

In 2008, House Speaker Nancy Pelosi stripped a Colombian free trade deal of its fast track status when the Bush administration attempted to move ahead with a vote without her approval, and she could do the same to stop Trump’s renegotiated NAFTA from being considered.

Democrats are insistent they do not want to rush through the process, even as the President hopes to ratify the agreement before Congress leaves for August recess. "What the calendar looks like is not as important as what the end result looks like for working people," DeLauro said Tuesday.