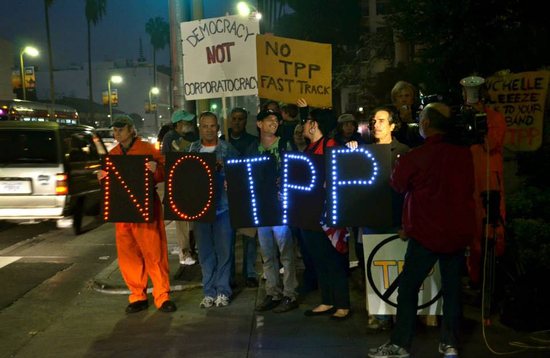 The final text of a huge 12-country trade agreement has confirmed the "worst nightmares" of environmental groups, with no mention of climate change in its lone environment chapter and weak enforcement mechanisms, Australian academics say.

The text of the Trans-Pacific Partnership (TPP) agreement was finally released on Thursday, with Trade Minister Andrew Robb saying the deal will deliver "substantial benefits for Australia" in the rapidly growing Asia Pacific.

The TPP is the biggest global trade deal in 20 years, involving 12 countries in the Pacific region which collectively represent over 40 per cent of world GDP.

Last month, Prime Minister Malcolm Turnbull called the deal "a gigantic foundation stone" for the economy which will deliver jobs and growth while avoiding aspects that would have seen increased costs to the taxpayer for medicines.

But this is the first time Australians have had a chance to see what the federal government has been negotiating on their behalf for over five years.

Matthew Rimmer, Professor of Intellectual Property and Innovation Law at the Queensland University of Technology, told Fairfax Media it looks like US trade officials have been "green-washing" the agreement.

"The environment chapter confirms some of the worst nightmares of environmental groups and climate activists," Dr Rimmer said.

Controversially, the deal includes a clause giving foreign companies the right to sue Australian governments if they introduce laws they say have harmed their investments.

"The general ’safeguards’ in the text are similar to those in other recent agreements which have not prevented cases against health and environmental laws," Dr Ranald said.

"Public health groups have influenced governments to include in the text the option of more clearly excluding future tobacco control laws from ISDS cases, which is important and has angered the tobacco lobby. But this also begs the question of how effective are the general ’safeguards’ for other public health and environmental laws."

Dr Rimmer also criticised the investment chapter, saying it was one of the most "labyrinthine" in the agreement.

But he also said the general exceptions chapter provided the opportunity for countries to carve out tobacco from the ISDS regime for tobacco control measures.

"That will be significant given Australia’s pioneering plain packaging of tobacco products," he said.

Mr Robb has issued a statement heralding the deal, saying Australians now have a chance to examine the text for themselves.

"Along with the landmark North Asian bilateral trade agreements we have concluded with China, Japan and South Korea, the TPP forms a transformational series of agreements that will contribute substantially to the diversification of our economy in this critical post-mining boom phase," Mr Robb said.

However, the text is still missing some important documents. Many of the side letters with details of last-minute bilateral deals between particular governments have not been released.

Dr Ranald said these side letters are likely to favour the largest economies with greater bargaining power, "and should have been released for public scrutiny with the main text."

Mr Robb said as these side letters are finalised they will be made available to the public.

The text shows 98 per cent of all tariffs will be eliminated across everything from beef, dairy, wine, sugar, rice, horticulture and seafood through to manufactured goods, resources and energy.

It has also removed barriers to Australian goods exports, services and investment abroad in the region.

Global trade officials hope the deal will establish a ’model’ for future trade agreements, by setting commonly-agreed rules and promoting transparency of laws and regulations.

Its open architecture allows for other members - such as China - to join in the future.