Don’t believe the hype - TTIP is not for small companies

Since 2013 Brussels and Washington have been negotiating a trade deal commonly known as TTIP (Transatlantic Trade and Investment Partnership). Due to the far reaching consequences of the treaty (in the way that it benefits the few and poses a threat to the great many), TTIP debates are now raging far beyond the corridors of Brussels, in the streets of cities and towns across Europe.

In this debate, big business has engaged in a campaign to win the hearts and minds of European people, for example promoting the idea that small businesses will make big gains under TTIP. Evidence though, reveals that big business itself does not believe what it sells to the European public.

Publicly, corporate trade associations such as Business Europe, representing big business in Brussels and their counterpart in London the CBI (Confederation of British Industry), claim that TTIP will bring “significant benefits” to SMEs and “opportunities to export”.

However, reports of the meetings of DG Trade – the department of the European Commission in charge of TTIP negotiations – with the CBI and MEDEF, representing big business in the United Kingdom and in France, and members of BusinessEurope, reveal that in reality big business does not believe that TTIP will benefit SMEs.

This is evidenced in the way that MEDEF asked DG Trade how it can “reassure the 19 million European SMEs which do not export and which will face increased competition” and CBI admitted that “the case for the benefits of TTIP [on SMEs] remains hypothetical”.

What they say in public

“A brochure from Business Europe released on January 2015 highlights why small and medium enterprises are poised to receive significant benefits from the TTIP negotiations.”

The Confederation of British Industry, CBI, represents big business in the United Kingdom. For them, TTIP will bring “new opportunities for small and mid-sized companies to export”.

What they say in private (behind-closed-doors meetings)

In March 2015, MEDEF, representing big business in France, had a meeting with the EU Commissioner on Trade.

MEDEF "asked how the communication services [of DG Trade] can reassure the 19 million European SMEs which do not export and which will face increased competition" .

On 1st July 2015, the CBI, representing big business in the United Kingdom, met with Maria Asenius, the Head of Cabinet of the EU Commissioner on Trade. The CBI admitted that “the case for the benefits of TTIP [on SMEs] remains hypothetical.” 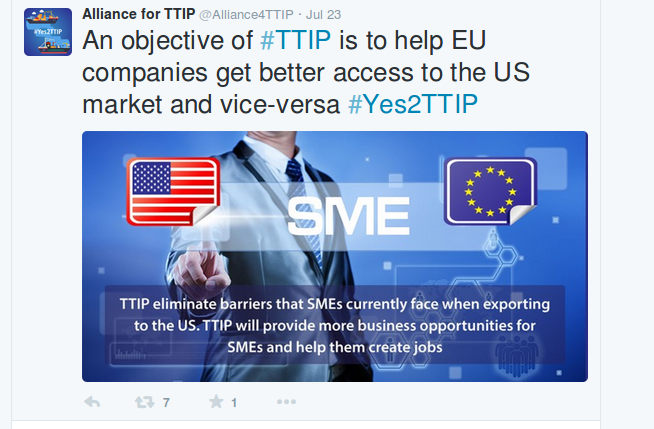 The Alliance for TTIP is an alliance of pro-TTIP trade associations. One of its members is BusinessEurope.

MEDEF and CBI are both important players in the TTIP debate. When they spearhead a campaign on the supposed benefits for SMEs – one that resonates in the discourse of governments and other business groups – it is fair to conclude that this part of the pro-TTIP effort is based on deception.

And this assumption is backed up by the words of small and medium enterprises themselves:

The German association of medium-sized enterprises (Bundesverband mittelständische Wirtschaft) considers ISDS (Investor-state Dispute Settlement, which allows corporations to sue governments), one of the many threats of TTIP, to be “unnecessary” and “strictly rejects” it because the proposed provisions “discriminate against medium-sized businesses”.

Similarly, the association of SMEs of the French-speaking part of Belgium thinks that small and medium-sized enterprises “have nothing to win from this deal. On the contrary, in its present form, it brings dangers”.Dangers for small and medium enterprises that big business portrays as opportunities.