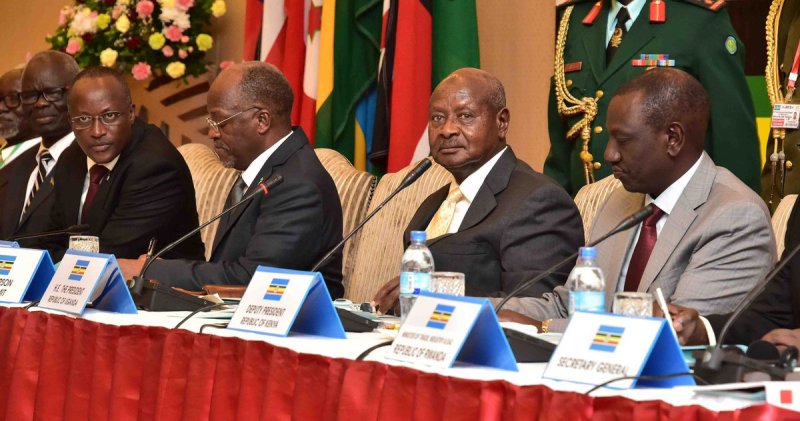 A decision on whether all the East African Community partner states will sign the European Union-EAC Economic Partnership Agreement (EPA) will be known in November during the Heads of State Summit.

Uganda’s President Yoweri Museveni, who is the chairman of the EAC, held a meeting with the European Commission President Jean-Claude Juncker on September 27 to present the concerns raised specifically by Tanzania on the EPA, leading to the delay of signing the agreement.

"I arrived in Belgium on a three-day working visit. As chairman of EAC, I will hold discussions with the EU over EPA and other related issues," confirmed President Museveni on his Twitter handle.

He was accompanied by the EAC Secretary-General Liberat Mfumukeko, ministers of trade from each partner state and assistant ministers or permanent secretaries.

Betty Maina, Principal Secretary in Kenya’s Ministry of EAC Affairs, said President Museveni presented the concerns raised by Tanzania on why it was unwilling to sign EPA, seeking clarification from the EU.

"We expect that EU will respond to the concerns before November. A decision and partner states’ position will then be known in November," said Ms Maina.

Tanzania is concerned that signing a bad EPA will compromise the region’s interests in subsequent trade negotiations.

Among the contentious issues is that EU unilaterally puts embargos on trade under the EPA while Article 136 of the EPA still refers to the same agreement that the EU has used to put an embargo on Burundi.

Tanzania also says that EAC partner states will not operationalise the free movement of goods while there is no free circulation of goods in the region and no refund mechanism for Customs duty paid to another partner state.

The other concerns raised are on the effect of the Most Favoured Nation clause on the future engagement of EAC with third parties.

Tanzania is concerned about how the EAC partners will hold the EU liable as one party in case of failure to implement any of the EPA provisions when Article 132 (1) of the EPA does not define the EU as one party when it comes to the definition of parties and fulfilling of their obligations.

Also, Tanzania is concerned about how the EAC partner states will bridge the gap in their balance of trade with EU while continuing trading with raw materials, taking into account that the EPA has limited EAC policy space in instituting duties and taxes on export.

East African heads during their last Summit in May jointly agreed that the EAC members who have not signed the trade deal should not do so pending clarification of contentious issues.

"If an acceptable solution is not reached with the EU within the next six months, the chairperson, working with the Council of Ministers, is expected to explore the use of variable geometry in the implementation of the EPA by EAC member states," said President Museveni during the Summit.

The variable geometry allows partner states that are ready to sign and implement the EPA to go ahead with the decision. However, Article 37 of the EAC Customs Union Protocol stipulates that the partner states should sign the EPA as a bloc.