Ecuador’s president has urged Ecuadoreans to stand together after nationwide protests threatened to destabilise the country.

In a televised address, Alfredo Palacio said democracy should be protected and that he would not bow to the protests.

The demonstrations have been sparked by ongoing talks with the United States over a possible free trade agreement.

On Wednesday, the country’s interior minister resigned over the government’s handling of the crisis.

Alfredo Castillo said he had warned the government that the protests - which come just days after a strike by oil workers - could lead to a coup. 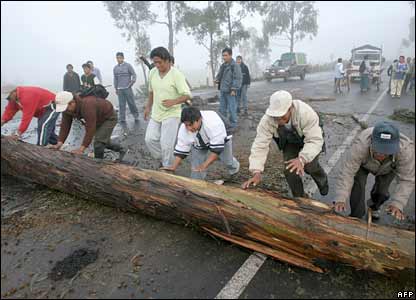 Mr Castillo is the third interior minister to resign from the post in just 11 months.

However, President Alfredo Palacio said the protests, led by indigenous communities, were designed to create chaos and to lead to the overthrow of his government.

Protesters say a pact with the US will affect their livelihood and are demanding a referendum on the issue.

Since Monday, they have blocked major roads with burning tyres, rocks and trees.

Reports say the blockades have already led to a shortage of provisions and a rise in prices in the capital, Quito, and other central provinces.

Thousands of police and troops have been mobilised as the protests have spread across the country.

Police have fired tear gas in an attempt to disperse the thousands of indigenous protesters who have taken part in the blockades.

At least six people have been arrested and 14 others injured in minor scuffles with security forces, according to police sources.

Indigenous groups say a deal with the US would harm their economy and their culture.

Indigenous leaders earlier rejected an offer by a government minister to set up a commission to look into their demands, calling it a new smokescreen.

A protest leader, Cesar Umajinga, told the BBC a trade deal with the US would only benefit the wealthy.

But Mr Palacio said Ecuador needed to be open to the world, and stressed he would only sign a deal which was in the national interest.

"We have achieved a negotiation based on mutual respect," the president said.

"I have declared that we would negotiate without giving up our sovereign national right to obtain the best trade terms to benefit our commerce, our technology, our sovereign passage to modernity," he stated.

The government has described calls for a referendum as premature.

Ecuador is set to enter a final round of the free trade talks on 23 March.

Colombia and Peru already having signed similar deals with the US.