Quito, Nov 17 2005 (Prensa Latina) Members of the Confederation of Indigenous Nationalities of Ecuador (CONAIE, in Spanish) are once more staging protests this Thursday to reject the signature of the Free Trade Agreement (FTA) with United States. 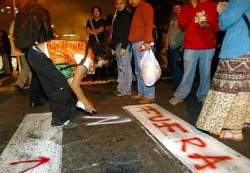 CONAIE spokesperson Patricio Shingri warned last night that the struggle against President Alfredo Palacio"s government will continue. He is accused of betraying his people and of creating a smokescreen to sign the FTA with Washington.

National mass media stated that 10 buses with 700 indigenous people arrived in this capital last night to join the group who spent the night at Quito’s House of Culture.

During Wednesday’s protests, CONAIE president Luis Macas urged Alfredo Palacio to carefully think over the document, because if he signs with the United States it would leave the country in a state of social shock.

If he does, warned Macas, it will destroy Ecuadorean agricultural production, privatize sources of water of the Amazon and worsen people"s health.