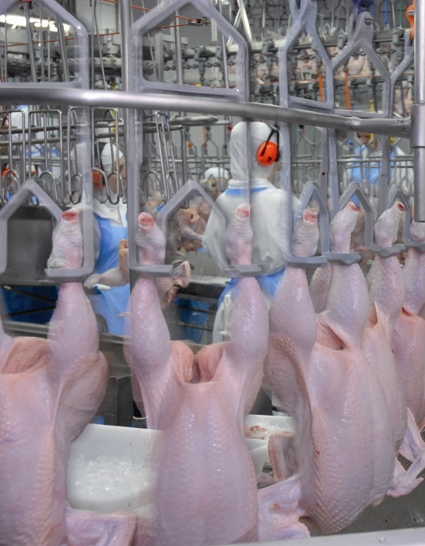 EFSA says use of peroxyacetic acid would not cause toxicity concerns

EFSA experts have been assessing the safety and efficacy of the use of peroxyacetic acid solutions for the reduction of pathogens in the poultry and meat industry.

Following a request from the European Commission, the Panel on Biological Hazards and the Panel on Food Contact Materials, Enzymes, Flavourings and Processing Aids were asked by the EFSA to deliver a Scientific Opinion on an application dossier submitted by the US Department of Agriculture for the approval of peroxyacetic acid solutions intended to be used by food business operators during processing for the reduction of pathogens on poultry carcases and meat.

In its report on the findings, EFSA said that some treatment applications were more effective than others – for example, dipping in baths are more effective than spraying – but it concluded that it was unlikely that the use of PAA would lead to the emergence of resistance to antimicrobials and reduced susceptibility to biocides.

It added there were no concerns regarding environmental risks of any of the components of the solution except for HEDP, as its release from a poultry plant into the environment was not always considered safe.

For more on how food safety standards are changing in advance of the EU-US FTA, check out http://www.grain.org/e/4846

For the view from poultry factory workers, see http://www.bilaterals.org/?chicken-plant-workers-say