EPA: a contract to destroy the Senegalese’ flimsy economy 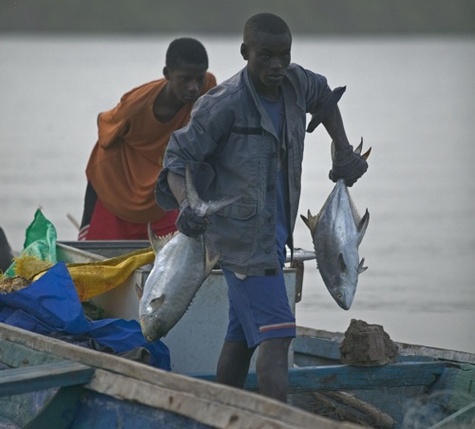 Fishers from Senegal coming back

The Economic Partnership Agreement (EPA) is a danger to the fishing sector and the food safety in the sub region and particularly in Senegal. Conscious of it, the NGO ActionAid encourages the refusal of the signature of the EPA. During a meeting with the press this Thursday, December 18th, ActionAid estimated that the acceptance of the APE may favour much more the plundering of the Senegalese fishing resources by the European ships.

Fishing is a strategic sector in Senegal because it creates many jobs. In a report entitled “Selfish Europe!” Aid Action indicates that it provides more than 600.000 jobs in Senegal. The report also reveals that in Senegal 70% of the need in animal protein comes from fishing. But the signature of the EPA may have a negative impact on this Senegalese economy jewel. It will encourage “the overexploitation of the fishing resources by the European ships and increase the food insecurity in Senegal” according to Moussa Faye, the resident representative of ActionAid in Senegal.

Indeed ActionAid considers that “the European ships through practices such as the “senegalisation” of their ships, the buying and the accumulation of fishing quotas and licenses or the repatriation of the capital circumvent the Senegalese government’s attempts to manage both the access and the control of resources coming from the sea”. To protect ourselves from all these possible nuisances it is necessary “to reject the APE” said Moussa Faye. Instead of the APE, ActionAid proposes a development and a cooperation agreement to have a look on our coasts, to protect and multiply our resources and to transform the halieutic resources in the local level in order to create jobs and to avoid the breaking up of the fishers’ community.

In addition to the destruction of the fishing resources, “the Senegalese companies are not yet ready to sign the EPA. In the framework of the preparation of the sub region, questions such as the Common external tariff (TEC), the sensitive products and the development program are not solved yet” according to Bathie Ciss in charge of projects at the NGO Enda.

In this level, he continues, “if the sub region signs the APE, it will face a European competition which the local companies will not be able to support. Thus, they will disappear. Consequently, there will be much more unemployed people and a problem of food and economy”. He said that, the interests of the African countries are in the development section whereas “since the beginning of the negotiations of the APE, the European Union puts the stress much more on the trade section than on the development. “We have young economies and we do not have a production which is subsidized. It means that we won’t be able to take part suitably in the competition” has precised Bathie Ciss.