Press release of the launch of the STOP EPA campaign at the Africa Social Forum in Lusaka, Zambia, on 14 December 2004

"The Economic Partnership Agreements (EPAs) being negotiated between EU and ACP countries represent the latest frontier in the efforts of the developed countries to open up and undermine Africa’s economy", said Tetteh Hormeku from Third World Network Africa, Ghana, at the launch of the STOP EPAs campaign. The campaign, which is initiated by African civil society, was launched today by Africa Trade Network at the Africa Social Forum in Lusaka. 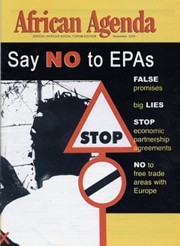 The EPAs are Free Trade Agreements negotiated between some of the world’s poorest countries and some of the richest. The EU is rushing the negotiations with completely unrealistic time frames and is pushing for issues which go far beyond what they have managed to get in the World Trade Organisation (WTO).

"Under the guise of a ’development partnership’, the EU is aggressively imposing its trade and investment liberalisation agenda on African countries. The EPAs - if implemented - will lead to loss of livelihoods, food insecurity, increased unemployment and social inequality in Africa", said Bakary Fofana from CECIDE, Guinea.

African governments will face significant losses in public revenue from the eliminiation of import duties through the EPAs.

"The loss of government revenue will seriously limit the already resource strapped African governments in their efforts to sustain delivery of basic services, such as health and education. This will be devastating for millions of poor people in Africa - and women and children in particular", said Mohau Pheko from Gender and Trade Network in Africa.