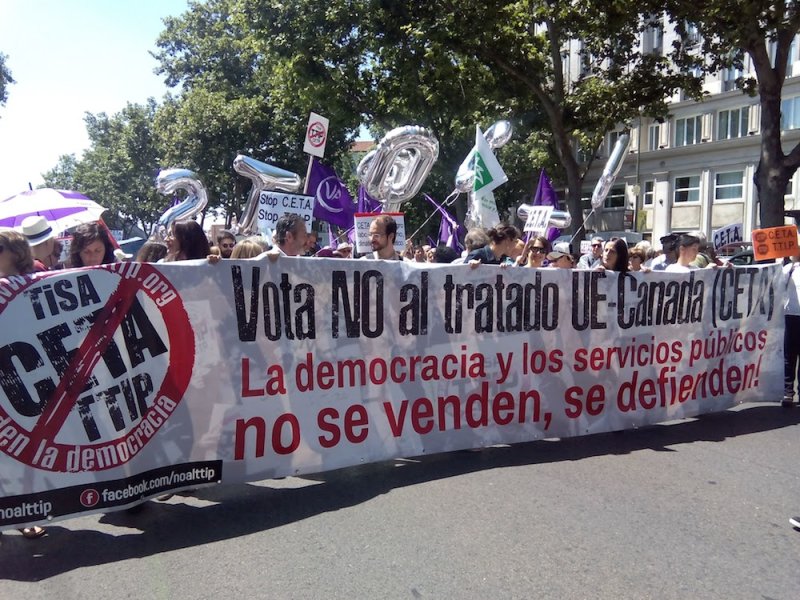 By KATIE MANSFIELD AND MARIA ORTEGA

Earlier this month Spain was gripped by protests over the Comprehensive Economic and Trade Agreement (CETA) and opposition continues.

The Spanish Socialist Workers’ Party (PSOE) will withdraw its support for the deal in a shock U-turn.

PSOE only voted in favour of the treaty the day before officials announced they would oppose the deal amid pressure from the group’s Secretary General Pedro Sánchez and trade unions.

Mr Sanchez’s team insists PSOE is in favour of international trade but is demanding certain conditions.

PSOE said in a statement: "The social democratic left wing is not against international trade but wants it in conditions and regulations that ensure the universalisation of rights and sensitive sectoral protections in each case.”

The CETA agreement has been seen as the EU’s most ambitious trade deal to date and is designed to remove regulations on trade across the Atlantic, making exports easier and cheaper.

If fully approved it will give Canadian businesses the power to sue governments should any new laws affect their profits.

The deal, which has taken seven years of talks to finalise, has already been held to ransom by the Belgian region of Wallonia and CETA has been blighted by delays and controversy with growing public opposition.

CETA was eventually received the support of 408 MEPs, against 254, among them the socialists from France, Belgium and Poland and MEPs of the minority or Europhobes.

EU bosses celebrated in October 2016 after signing the deal following seven years of tense talks but admitted the full agreement is years off with regional and national parliaments needed to green light the agreement.

EU deals with foreign countries need the unanimous support of all 28 member states.

The deal has angered Spaniards who claim their government has sold them out, while supporters of CETA say the agreement is designed to “create new opportunities for EU companies” by reducing tariffs and boosting trade and investment.

It could be set to increase Canadian-EU trade by 20 per cent and boost the EU economy by £10billion (€12billion) a year and Canada’s by £6.9billion ($12billion).

However, Spanish protesters are not convinced of its positive affect on their country.

They fear that it will harm the environment, labour and consumer standards, resulting in job losses.