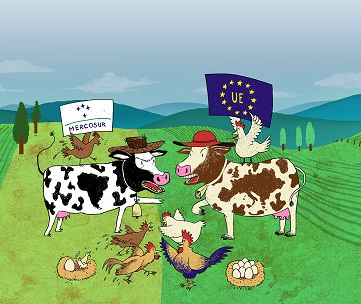 The European Union expects to advance cooperation and trade discussions with Mercosur late this month in Chile in the sidelines of the EU/Celac (Community of Latin American and Caribbean States), said EU ambassador in Chile, Rafael Dochao Moreno.

Although the EU/Mercosur agreement is not expected to be finalized at the 26/27 January summit, “it will be a chance to discuss the points that are currently blocking the agreement on free trade”, said the ambassador.

The 27 members of the EU and four from Mercosur resumed free trade negotiations in May 2010 following six years in which talks were stalled because of EU criticisms to Mercosur tariffs on manufactured goods and services, while the South American block complained about European farm protectionism and subsidies.

Both blocks must also address the current trade disputes which have reached the World Trade Organization, WTO, mainly involving Argentina and reciprocal claims of restrictions to the free flow of goods.

“We’re waiting for calmer waters to keep advancing” said ambassador Dochao ahead of the summit which will bring together leaders from the EU 27 members and Celac’s 33, which for the first time will be acting as an international group.

Ambassador Dochao also advanced that during the two day meeting, EU and Peru and Colombia will ratify and agree on the beginning of the bilateral free trade agreements.

“These are the ‘latest generation’ of free trade agreements and signal how future relations with Latin American countries should be displayed”, said Dochao, who added that in 2010 EU members invested 385 billion Euros in Celac members, which represents 43% of foreign investment in the region.

According to Dochao, European Commission president Jose Manuel Durao Barroso, the head of the European Council Herman von Rompuy and EU chief diplomat Catherine Ashton will be attending the summit at the end of January. Presidents Mariano Rajoy and François Hollande, from Spain and France will be arriving in Santiago a day before the summit for official visits to Chile.