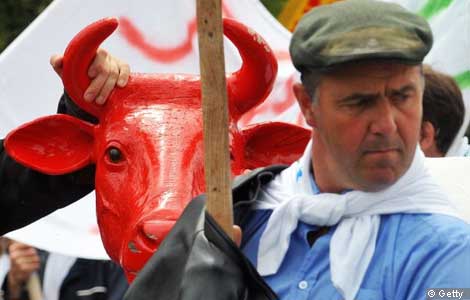 The sector most affected would be the meat industry

European Union farmers could suffer losses ranking from one to three billion Euros if a trade agreement is finally agreed with Mercosur according to a European Commission evaluation paper on the impact.

The sector most affected would be the meat industry.

These numbers, (from less ambitious to most ambitious scenarios) only refer to the hypothetical result of current negotiations for a trade agreement based on concessions from both sides.

However they do not take into account the possible impact of the conclusion of the Doha Round for the liberalization of world trade, which anyhow remain stalled, points out the report.

The impact report which was ordered by the EC is not of public domain yet, although some of its details have surfaced, and has been distributed to EU member countries which have begun to analyze its content and conclusions.

The negative numbers for agriculture from the EC report contrast with another paper from the EU agrarian organizations and cooperatives released in the first quarter of this year and which anticipated losses for agriculture to the tune of 25 billion Euros.

According to the assessment the EU production of beef would be one of the most exposed since Mercosur countries are world leaders in the industry.

The report indicates that in such a case, compensatory measures could be established for EU farmers with funds from the agriculture budget or the EU Fund for Adjustment to Globalization, which anyhow would have to be negotiated in the following economic prospects (2014/2020).

It is precisely differences on farm initiatives, among other issues, that have prevented the EU and Mercosur from exchanging the access to market lists, and no further advances are forecasted for the next round of negotiations expected to take place between November 7 and 11 in Montevideo, since Uruguay currently holds the Mercosur chair.

The EC report points out that overall the conclusion of a trade agreement EU/Mercosur would mean total benefits for the European side in the range of 14 to 21 billion Euros, if the agreement is finally worked out in its most possible ambitious terms.

It also indicates that European exports to Mercosur would double. And Mercosur member countries would benefit with an increase of their turnover equivalent to 0.3% of GDP.

Negotiations for an association agreement between the EU and Mercosur was scheduled to be addressed Monday by visiting Brazilian president Dilma Rousseff and top officials from the EU, as part of the summit held in Brussels.