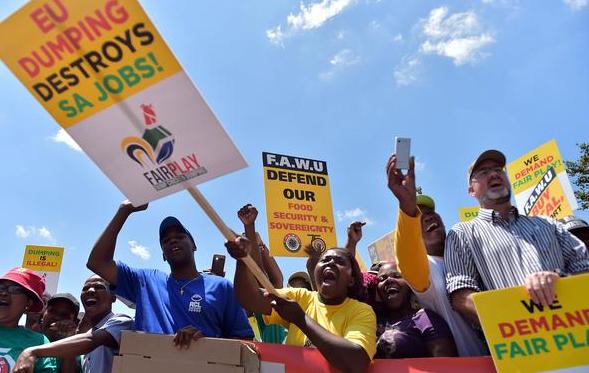 The European Commission has expressed concern after hundreds of people protested in Pretoria, South Africa, against EU poultry dumping that has forced profit­-hit chicken processors to cut jobs.

Brussels has hit back at South African poultry processors and trade unionist claims that the EU’s “unlawful” dumping of chicken legs is to blame for a crisis that has seen jobs and profits fall dramatically.

Over 700 factory workers, trade unions and business executives protested outside the EU office in Pretoria on 1 February 2017. Carrying placards that read: “Stop EU dumping”, “We Demand Fair Play” and “No More EU Waste”, protesters want to see an end to poultry dumping. It follows a decision made by RCL Foods to axe over 1,000 jobs as chicken supply outstrips demand.

In defence of trade

The European Commission (EC) admits poultry exports to South Africa are rising, but said it is “concered” with the situation.

“Trade defence measures as such, if applied according to the WTO rules, constitute a legitimate tool to tackle unfair trade, and as such are also used by the EU,” an EC spokesman told this site. ‘Solution’ needed

“Current safeguard duties in South Africa do not address in our view the real causes of the difficulties of the South African poultry industry. Therefore, the Commission remains concerned by these recent measures and will continue to discuss the matter with the South African authorities to find a solution.”

Pitman, who is managing director of RCL Foods poultry brand Rainbow Food, read out a memorandum at the February protests this week, rejecting “with contempt” EU claims that South Africa has only itself to blame for the crisis.

“The South African industry is modern, efficient, and well able to compete effectively against fair competition... No market, however efficient, can compete against dumping. If tariffs are raised, prices will be lowered to get rid of the frozen surplus,” Pitman said.