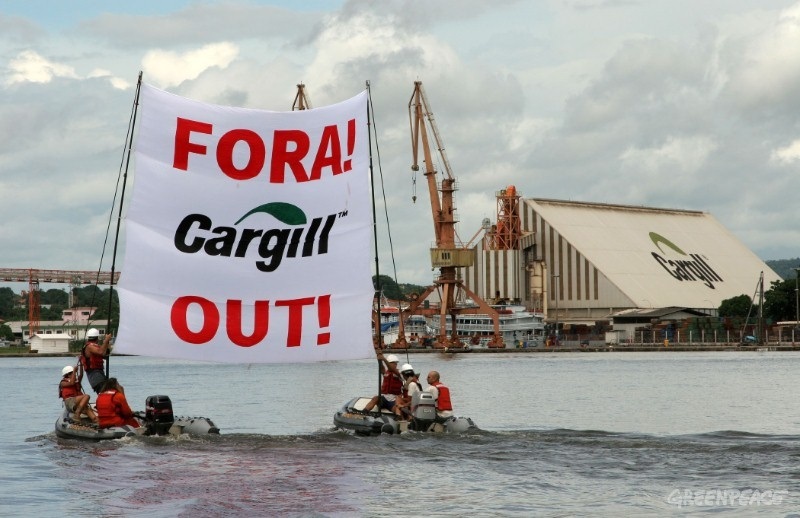 Secret documents, leaked by Greenpeace, revealing confidential trade talks held between the European Union (EU) and Mercosur, the South American trade bloc (Brazil, Argentina, Paraguay and Uruguay), suggest that the agreement, which negotiators hope to clinch by year’s end, could exacerbate environmental problems in Mercosur countries, despite the inclusion for the first time of human rights clauses, aimed at protecting indigenous groups.

While this new European concern with indigenous rights will be welcomed by activists, the underlying environmental problem with the agreement – that it will further encourage Mercosur country exports of agricultural products, particularly beef and soy – remains.

With almost all arable land in Argentina and Uruguay already planted with soy and corn, the majority of “available” land is found in Brazil. However, as Mongabay has reported in many articles, the expansion of soy farming and cattle ranching there drives deforestation and the destruction of precious ecosystems.

“Mercosur countries want to boost meat exports to Europe, which would push cattle farming into pristine habitats in the Amazon and the Cerrado regions in Brazil, and the Chaco in Argentina,” said Greenpeace trade campaigner Kees Kodde.

According to Greenpeace Netherlands, which obtained 171 pages of previously undisclosed documents, the leaks expose the failure of the European Commission and European state governments to stick to commitments on transparency. With so much secrecy surrounding the talks, Greenpeace says, it has been impossible for analysts to assess properly the impact the deal will have on Mercosur nations. And now, as the accord nears finalization, there is little time left for public comment or input.

The leaked documents show that both trade blocs are seeking to maximize market access while also increasing exports. The European Union’s focus is on exporting financial services to Mercosur countries, and gaining market access for energy companies, cars, motor parts and beverages, among other businesses. The EU wants European companies to be able to bid on procurement contracts at the local level, including contracts with big municipalities and federal states. The Mercosur countries want easier access for their exports, largely agricultural goods, to a large and wealthy EU market of about 250 million consumers.

Although being presented as a win-win deal that benefits both sides, the agreement is controversial.

EU farmers are enraged by what they see as a double standard. Barclay Bell, the Ulster Farmers’ Union president, in Northern Ireland, said that South American countries do not come close to matching the food safety, animal welfare or environmental regulations growers must observe in Europe : “Farmers in the UK comply with world-leading standards, so it seems completely hypocritical for UK politicians to keep raising the bar for UK farmers, yet accept much lower standards for inferior products exported from South America.”

Environmentalists are concerned about ecosystem impacts. The leaked documents reveal an agreement with a chapter on trade and sustainable development. In part, it pledges to : “enhance the integration of sustainable development in the Parties’ trade and investment relationship, notably by establishing principles and actions concerning labor and environmental aspects of sustainable development.” Article five reads : “The Parties recognize the importance of pursuing the ultimate objective of the United Nations Framework Convention on Climate Change (UNFCCC) in order to address the urgent threat of climate change and the role of trade to this end.”

Critics, however, see this as lip service. The agreement, in practice, by increasing agricultural exports to Europe and encouraging more cattle and soy production in the Amazon, Cerrado, and Chaco, can only make it harder to implement the Paris Climate Agreement, and much more difficult to keep average global temperatures from rising more than 2 degrees Celsius (3.6 degrees Fahrenheit), with likely catastrophic results.

The Amazon rainforest, a vital carbon sink, may already be producing more carbon than it absorbs, largely as a result of deforestation and human-caused forest fires used to clear land for agriculture. This trade agreement, which will boost farm commodities exports from Mercosur, and mean the conversion of more forest to crop and grazing lands, will accelerate carbon emissions, which soared in Brazil by nearly 9 percent in 2016.

Experts also say that the trade deal is expected to bring greater benefits to the EU than to Mercosur. A report by the European Union predicts that the rise in the EU’s GDP would be at least five times greater than the rise in Mercosur’s GDP :

A 2011 external impact assessment estimates the gains for the EU through increased exports of industrial goods could range between €21 and €29 billion. It states that the deal could enhance the EU’s GDP by €15-21 billion and Mercosur’s GDP by €2-3 billon.

The trade deal between Mercosur and the EU has been in the pipeline off-and-on for almost two decades. Negotiations began in 2000 but were suspended in 2004 after substantial differences emerged between the parties concerning the level of liberalization of trade in agricultural goods, services and public procurement markets. With progressive governments in power in much of South America, many analysts thought the deal was dead.

But the talks gained momentum in 2016, after Mercosur governments lurched to the right politically, with progressive presidents voted out of power or impeached. In one leaked document, the EU welcomed “the arrival in power of pro-business presidents in Argentina and Brazil.”

It is widely accepted today that the world cannot go on producing and consuming more and more meat without doing serious – and almost certainly irreversible – damage to the environment, and especially the climate. In the same week that Greenpeace leaked the Mercosur documents, analysts from Farm Animal Investment Risk and Return (FAIRR), which manages more than $4 trillion in assets, said that it seemed “inevitable” that within five to ten years some form of meat tax will emerge to curb consumption and limit the impact of the global livestock industry on greenhouse gas emissions. The industry contributes 15 percent of greenhouse gas emissions today and meat consumption is rising around the world.

Jeremy Collier, the founder of FAIRR, said : “Far-sighted investors should plan ahead for this day,” advice that applies in equal measure to beef- and soy-producing countries.

The new concern of EU politicians for upholding indigenous rights, even to permit trade embargoes against Brazil if the clauses are broken, is a positive development, but it will do little to mitigate the harmful impact of the EU’s growing reliance on soy and beef imports.

While the Brazilian and Argentinian governments strongly support the deal, largely because of their politically powerful agribusiness lobbies, the Venezuelan government (formerly a Mercosur member) is fiercely opposed. Fernando Vicente Prieto, a member of the pro-government organization ALBA Movimientos, said that that this is the kind of accord that is “controlled by big companies and sets up cartels in the different sectors.” Although political differences may have played a role, observers believe it was Venezuela’s vehement opposition to the EU agreement that was the main factor that led to the suspension of its membership from Mercosur in October 2017.

International trade agreements tend to be similar – ranging from NAFTA to CETA, TTIP and TPP, such pacts are made in secret, with negotiations dominated by corporate lawyers, and with the environment, democracy and national sovereignty brought in as an afterthought. The EU-Mercosur agreement looks not to be fundamentally different. Nick Dearden, director of the London-based NGO, Social Justice Now, told Mongabay, these accords “lock developing countries into colonial patterns of trade whereby they export low-value products and import high-value goods, and this distorts their economies.”