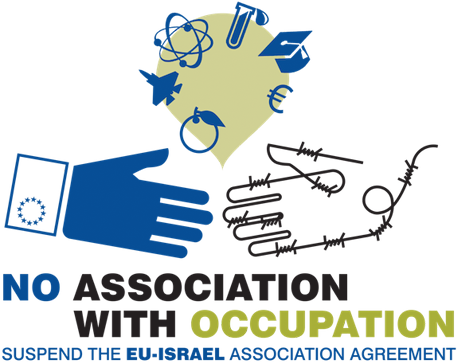 by Michael Deas at Electronic Intifada

More than 300 political parties, trade unions and campaign groups have called for the suspension of a key agreement between Israel and the European Union.

The appeal urges the EU to freeze the “association agreement” with Israel. That deal, which entered into force in 2000, facilitates largely unrestricted trade between the EU and Israel and allows Israel to participate in a wide range of the Union’s programs.

The appeal, delivered to the new EU foreign policy chief Federica Mogherini, is one of the most widely endorsed statements by European organizations on Palestine to date.

Signatories to the statement come from 19 different European countries. They include Podemos, the leftist party currently leading the polls in Spain, the Irish Congress of Trade Unions and other major trade union bodies from Spain, Denmark, France and Belgium.

Major anti-poverty groups, including the CNCD/11.11.11. coalition and Broederlijk Delen in Belgium, Trócaire in Ireland and War on Want in the UK endorsed the statement.

Other signatories include Parti de Gauche and Parti Communiste from France, Attac (a group critical of capitalist economics) in France and Germany and the anti-war organization Pax Christi Germany.

A simple website has been set up at freepalestine.eu, through which people can contact members of the European parliament (MEPs), urging them to read the statement and support its demands.

“Through the continued existence of the EU-Israel association agreement and the strengthening of the bilateral relations, the European Union and its member states are sending Israel the message that it does not have to abide by international law,” the statement explains.

Condemning Israel’s deliberate targeting of civilians during its recent attack on Gaza, the statement says that the failure of the EU to hold Israel accountable for its recent war crimes “contributes to the climate of impunity and lack of accountability” and sends Israel “the message that it does not have to abide by international law.”

The statement also condemns the “material support” that the EU affords to Israel’s crimes.

The EU has been repeatedly criticized for failing to take tougher action against economic links with Israeli settlements in the occupied West Bank and for allowing Israeli military companies to receive EU research funding.

In a press release, Aneta Jerska from the European Coordination of Committees and Associations for Palestine (ECCP) argues that the breadth of support for the appeal showed that the mood in Europe was changing.

“The huge number of mainstream organizations that are calling for the suspension of the EU-Israel association agreement reflects the growing frustration across Europe with the failure of European governments to respond to Israel’s repeated massacres and violations of international law.”

“The EU has long argued that its close relations with Israel put it in strong position to engage in dialogue with Israel regarding its oppression of Palestinians, but Israel’s brutal massacre of Gaza shows that this dialogue has failed. It is time for the EU to take action that will pressure Israel to comply with international law,” she adds.

As well as launching an e-platform for contacting MEPs, the ECCP has also published a fact sheet setting out how the EU-Israel association agreement facilitates Israel’s crimes.

The fact sheet contrasts the EU’s swift action against Russia and other countries it believes to have acted illegally with its active support for Israel:

Article 2 of the association agreement states that: “Relations between the parties… shall be based on respect for human rights and democratic principles, which guides their internal and international policy and constitutes an essential element of this agreement.”

The continued application of the EU-Israel association agreement despite Israel’s clear violation of the Article 2 clause sends a message to Israel that its massacres of Palestinians will be tolerated and will not result in any meaningful impact on its close relations with the EU. This creates a climate of impunity.

The EU suspended its association agreement with Sri Lanka in 2010 and has applied restrictive measures on Russia with regards to its annexation of Ukrainian territory and a host of other states judged to have violated human rights and international law in recent years.

The failure to apply similar measures to Israel is a double standard that amounts to support for Israel’s continued violations of international law.

Palestinian civil society organizations recently wrote to the EU External Action Service to explain that this double standard “sends a clear message to Israel that its massacres of Palestinians will be tolerated and will not result in any meaningful impact on its intimate relations with the EU.”

The fact sheet also sets out how EU policy supports the continued expansion of illegal Israeil settlements and helps Israeli military companies to further develop drone technology for use against Palestinian civilians.

EU governments and institutions made some of their strongest criticisms yet of Israel in the wake of its recent massacre of Gaza, and much has been made of declarations of support for Palestinian statehood by the Swedish government and the UK parliament.

The French parliament will vote on a resolution on Palestinian statehood later this month.

Yet for all their bluster, the EU and its governments are failing to hold Israel to account, or even ending their active support for Israeli violations of international law.

Palestinian organizations recently wrote to the European External Action Service — effectively the Union’s foreign ministry — to demand the suspension of the EU-Israel association agreement, arguing that “Israel’s war crimes and its sabotage of every effort to reach a just peace based on UN resolutions must lead to effective and substantial, not just cosmetic, consequences.”

Bold action by MEPs in support of the demand to suspend the association agreement would be a useful start.