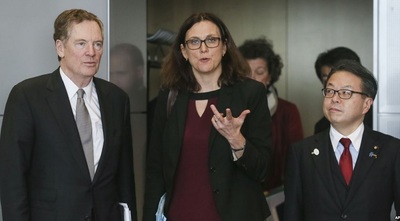 (AFP) The EU’s top trade official on Friday said the bloc was open to pursuing a limited trade deal with the United States, once Washington granted a full exemption from punishing metals tariffs.

"I would say that a more limited agreement would be the easiest one if we want to get results quickly," EU Trade Commissioner Cecilia Malmstrom told AFP in an interview.

Malmstrom spoke just days after Washington granted Europe and other allies a one-month delay from imposing controversial tariffs on steel and aluminium, averting a trade war for now.

The 25 percent tariffs on steel and 10 percent duties on aluminium were set to go into effect on Tuesday, but the US Trump administration granted the reprieve in the goal of achieving vaguely defined trade concessions from the European Union.

Malmstrom said a US trade deal would be something "totally different" from the attempted and highly ambitious TTIP deal, that was abandoned once Donald Trump took office last year.

"This is something we could explore on only tariffs on goods and some other low hanging fruits," she said, ruling out including far more sensitive items such as aligning US and EU health and safety regulations.

The deal would require a lengthy "scoping" process and then would need the unanimous approval of the EU member states in order for talks to begin, she added.

"We could start exploring it to get a better picture of it, but then you have to get a mandate from the member states to start negotiations," she said.

The idea would only move forward after a full exemption from the US, she underlined.

Malmstrom said she was in contact with US Commerce Secretary Wilbur Ross "several times a week" and the discussions would continue.

Europe — which last year exported over $7.7 billion of steel and aluminium to the US market — had lined up its own punitive tariffs on American imports, including iconic items like Harley-Davidson motorbikes, blue jeans and bourbon whiskey.

"We have the list prepared as agreed by member states, but we will see if we will use it," Malmstrom said.