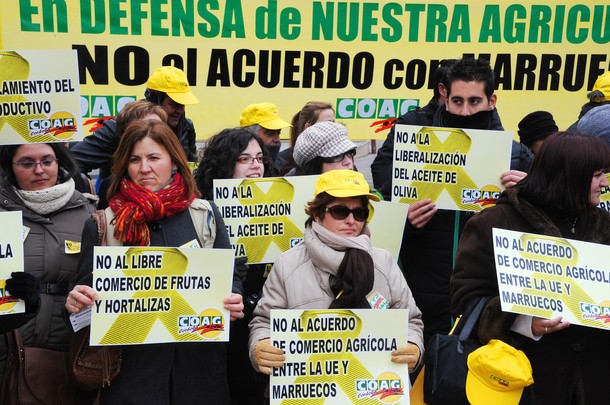 Spanish farmers protest against the EU-Morocco agriculture agreement in front of the European Commission delegation in Madrid on February 14, 2012. (Getty Images)

BRUSSELS (Reuters) — European Union lawmakers approved a new trade deal with Morocco on Thursday that will significantly extend duty-free sales of agricultural, food and fisheries products between the North African kingdom and the 27-nation bloc.

The EU’s agriculture chief, Dacian Ciolos, described the deal as both economically and politically significant.

"It is a balanced agreement, which opens new opportunities for our producers in Europe paves the way for a real reinforcement in our relations with Morocco," he said.

But critics said the deal would threaten the livelihoods of small-scale agricultural producers in Morocco and Europe and prolong a decades-old dispute over control of the Western Sahara.

"By failing to exclude the non-self-governing territory Western Sahara from the agreement, as the U.S. has done, the EU is adding to the difficulties preventing a peaceful resolution of this conflict," he said. 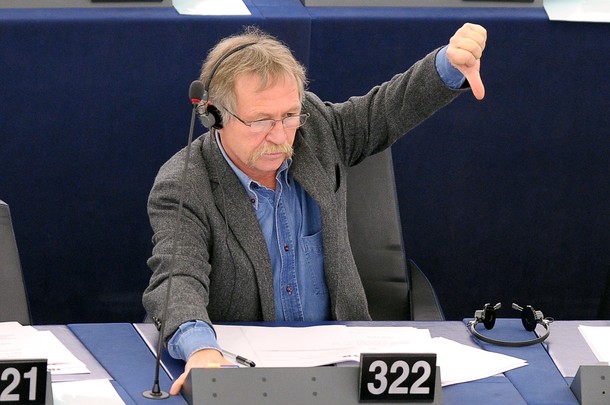 Morocco’s agriculture and fisheries Minister Aziz Akhannouch dismissed these accusations saying many small farmers affiliated to giant exporting cooperatives would benefit of the deal, which he said ensures greater balance in trade exchanges with the European Union.

"Eighty percent of farms here are less than five hectares (12 acres) big. You can’t expect them to export their produce by themselves, that’s why they join bigger cooperatives," he told reporters in Rabat.

Campaign group Western Sahara Resource Watch said the deal would encourage the continued expansion of tomato plantations near the town of Dakhla in the southern part of the territory, which it said are all owned either by the Moroccan king, Moroccan conglomerates or French multinational firms.

The plantations extract their water from non-renewable underground water basins and operate without the consent of the local Sahrawi population, they added.

Akhannouch said Rabat was "satisfied that the deal imposed no restrictions that affect our territorial unity", in apparent reference to plantations located in the disputed area. DUTY FREE

The agreement will allow 70 percent of EU agricultural exports to enter Morocco duty-free within the next decade. This includes oilseeds and cereals, with the exception of common wheat and durum wheat, for which Morocco would apply improved rates.

In return, the EU will immediately lift all its current duties on 55 percent of imports from Morocco. 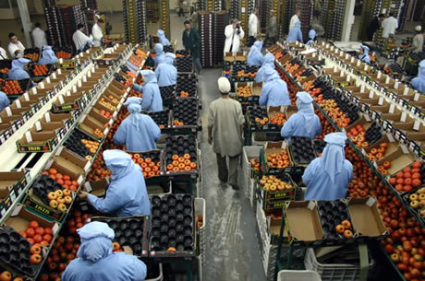 Industrial-farmed tomatoes getting packed for shipment to Europea

Some safeguards were agreed as part of the deal to limit the impact of granting improved access to unprocessed fruit and vegetables from Morocco, which currently account for 80 percent of total EU imports from the country.

The agreement will allow only moderate increases in import quotas for certain sensitive products, such as tomatoes, strawberries, cucumbers and garlic, and includes seasonal import quotas to avoid oversupply on the EU market.

But Spanish farm unions said the deal would put at risk 450,000 jobs that depend on growing fruit and vegetables in a country that already has the highest unemployment rate in Europe.

The COAG union said in a statement it would challenge the agreement at the European Court of Justice on the grounds that imports from countries that do not adhere to EU labour and environmental standards distorts the market.

"We will not stand idly by while the EU abandons Spanish fruit and vegetable farmers to their fate while allowing the uncontrolled entry of Moroccan produce grown at starvation wages," COAG spokesman Andres Gongora said.

The deal is expected to be formally adopted by EU ministers in the coming weeks before entering force in May or June.