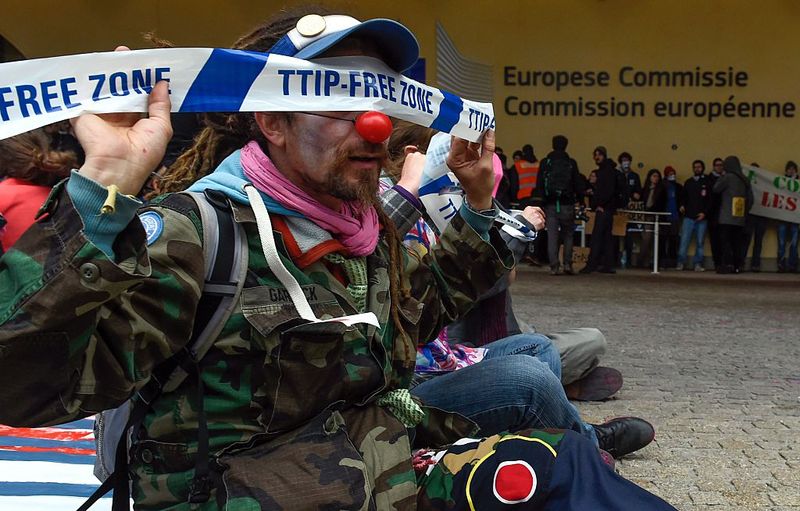 WASHINGTON (Reuters) - The European Union will not support a comprehensive trade deal with the United States that includes agriculture, the EU’s top trade negotiator said on Thursday, so she is working toward a narrower deal focused on industrial goods and automobiles.

The European Union’s trade commissioner, Cecilia Malmstrom, said at a Georgetown Law School event that an industrial goods agreement could be achieved more quickly and could rebuild trust between the two largest trading blocs that had been eroded by U.S. tariffs on steel and aluminum.

“If we start with industrial goods, which is much less complicated, and which will be beneficial from both sides, we maybe can rebuild that trust and then maybe we’ll see later” about agriculture, she said a day after meeting with U.S. Trade Representative Robert Lighthizer.

The EU and the United States spent three years trying to negotiate a comprehensive trade deal, the Trans-Atlantic Trade and Investment Partnership (TTIP), but the talks failed to bridge gaps on allowing more U.S. access to Europe for agricultural products, including genetically modified crops, wine and cheese.

“A full, comprehensive trade agreement - TTIP-style: there is no support for that in the European Union right now. That’s the truth,” Malmstrom said.

Europe has retaliated against the Trump administration’s tariffs on EU-produced steel and aluminum based on national security grounds, imposing tariffs on a range of U.S. products from Harley-Davidson motorcycles to bourbon whiskey.

U.S. President Donald Trump is currently considering whether to impose similar “Section 232” tariffs on imported autos and auto parts on national security grounds, an action widely seen as a tool to gain negotiating leverage over the EU and Japan to lower their tariffs and non-tariff barriers to U.S. auto imports.

Trump pledged last year to European Union President Jean Claude Juncker that he would not impose such tariffs on EU-made cars as long as there is progress in the negotiations.

But the two sides have not yet agreed on the scope of the talks. The U.S. Trade Representative’s office said in its negotiating objectives for the EU talks, published in January, that it would seek to reduce or eliminate EU tariffs and non-tariff barriers to U.S. farm products.

Members of the U.S. Congress have demanded increased agriculture access to Europe, and Senate Finance Committee Chairman Chuck Grassley, an Iowa farmer, has said he does not see how a deal that excludes agriculture could win congressional approval.

European member countries must approve two negotiating mandates to formally launch talks. But while Germany aims to start quickly, France has been more reluctant and remains adamantly opposed to talks on agriculture.

On Thursday, Malmstrom said the EU would be ready to launch negotiations with the United States within weeks.

She added that European officials would like to see cars and auto parts included in the talks, but said she had not seen any details about the U.S. recommendations regarding related “Section 232” tariffs.

Malmstrom also called on the Trump administration to take a lead role in reforming the 24-year-old World Trade Organization, whose rules have failed to address modern trade problems, such as China’s excessive subsidies and technology transfer policies.

“Unless we save the international order, it may well be replaced and we might not like all of what we see,” she said.