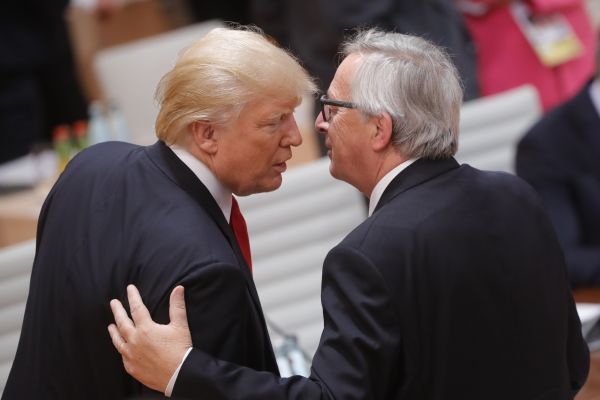 by the European Commission

Today marks the first anniversary of the Joint Statement by President Juncker and President Trump, which launched the new phase in the relationship between the United States and the European Union.

As a first step, the Presidents set up an Executive Working Group, co-chaired by Commissioner for Trade Cecilia Malmström and her counterpart US Trade Representative Robert Lighthizer, to work on the different tracks for cooperation identified in the Joint Statement.

One year on, a series of concrete actions have been achieved, taking the trillion-dollar transatlantic trade relationship to the next level. A report on the implementation of the EU-U.S. Joint Statement of 25 July 2018 was published today, providing an overview of the progress made and illustrating the depth of the engagement between EU and U.S. over the past year, both at political and technical level.

On this occasion, the President of the European Commission, Jean-Claude Juncker said: “The European Union is delivering on what President Trump and I agreed on this day last year. We want a win-win situation on trade, which is beneficial for both the European Union and the United States. Having one of the most important economic relationships in the world, we want to continue strengthening trade between us based on the positive spirit of last July.”

Since July 2018, the EU has significantly increased its imports of liquefied natural gas (LNG) from the U.S. by over 367%. So far, in 2019, one third of all U.S. LNG exports have gone to the EU. The U.S. is the EU’s third largest supplier of LNG, while the EU has emerged as the primary destination of U.S. LNG exports.

EU imports of U.S. soya beans increased by almost 100% from July 2018 to June 2019, compared to the same period the previous year. The United States is now Europe’s number one soya beans supplier and has been able to expand its market further, following the decision by the European Commission on 29 January 2019, to authorise the use of U.S. soya beans for biofuels.

Following the Council’s mandate of 15 April 2019 to open talks with the U.S. for a horizontal agreement on conformity assessment, there have already been three rounds of constructive discussions on regulatory cooperation. An EU-U.S. agreement would allow exporters from a wide range of sectors to get certification of their products in their own country (as opposed to, for example, sending samples to the export destination).

The Council gave the Commission the authorisation to open talks with the U.S. on eliminating tariffs on industrial goods. While it was not yet possible to launch negotiations in this area due to diverging objectives on the two sides, the EU remains ready to engage with the U.S. along the lines agreed between the two Presidents in July 2018.

Regarding cooperation on standards, the EU presented its ideas on a deeper cooperation in strategic sectors, in particular those related to emerging technologies, such as 3D printing, robotics and connected vehicles. Important progress has been made in the areas of pharmaceuticals, medical devices and cybersecurity. On pharmaceuticals, the EU and U.S. reached a milestone on 11 July 2019, as all EU Member State authorities were recognised under the Mutual Recognition Agreement (MRA) on good manufacturing practices for human medicines. This has already resulted in cutting of costs for businesses and freeing up administrative resources, by avoiding the duplication of inspections.

The EU and U.S. have engaged to identify and address distortions caused by unfair market-distorting trade practices. Together with Japan, both partners have submitted a joint proposal in the World Trade Organization (WTO) to enhance Members’ compliance with transparency requirements. The trilateral EU-U.S.-Japan process is also expected to lead to proposals for new rules on industrial subsidies and State Owned Enterprises.

In addition, a recent example that illustrates the excellent cooperation fostered in the spirit of the July 2018 Joint Statement, is the agreement found on the share of a duty-free tariff rate quota for U.S.exports of hormone-free beef to the EU market.

The EU continues to make the case for ending U.S.tariffs on steel and aluminiumcomingfromthe EU, which would also benefit the U.S., since Americanproducers would be able to source these materials more cheaply from the EU. The EU could then also remove the rebalancing tariffsonU.S.exports.

The United States and the European Union have a $1 trillion bilateral trade relationship with more than €3 billion in two-way trade every single day. Together both sides count more than 830 million citizens and close to 50% of global Gross Domestic Product. This is the largest economic relationship in the world.

With their Joint Statement of 25 July 2018, President Juncker and President Trump expressed their commitment to further strengthen this trade relationship to the benefit of all American and European citizens.