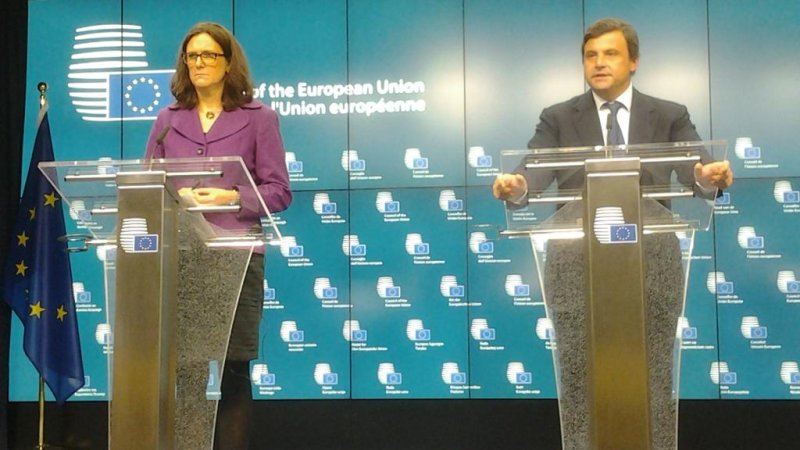 If we don’t have ISDS in our trade deal with the US, we cannot we cannot put it in our deals with China or Vietnam, Calenda (R) puts it.

BRUSSELS: Europe’s proposed free trade agreement with the US would collapse if European leaders bowed to pressure to remove investment protection from any deal, the chairman of EU trade ministers said.

The US and the European Union are trying to seal a free trade deal which could bring economic gains of around $100 billion a year for each side.

But progress has slowed partly due to stiff resistance from environmental groups and Germany to the trade pact’s Investor-State Dispute Settlement Clause (ISDS), which allows companies to take cross-border legal action against governments.

Critics have said that investment protection should be removed from the EU’s negotiating mandate.

"If we try to change the mandate, it would be the same decision as to abandon the negotiations," Italy’s deputy industry minister Carlo Calenda, who is responsible for trade, told Reuters in an interview after EU trade ministers met.

"It would be more than a missed opportunity because while the rest of the world is moving at a fast pace and you remain stuck, you are losing market share."

The European Commission, which handles trade negotiations on behalf of the 28-member European Union, has suspended talks on investment protection pending a public consultation, the results of which are expected to be published in the coming month.

It is then expected to spend months discussing how such investment talks would restart. Calenda said ISDS had to be part of the Transatlantic Trade and Investment Partnership, as the EU-US free trade deal would be known.

EU trade ministers meeting in Brussels agreed a joint declaration saying they wanted an ambitious trade deal with the US.

Calenda said the declaration was significant after a meeting in Rome last month when not all trade ministers backed his view that talks needed to be sped up.

"At a certain point it was very unclear due to the tonnes of declarations that were going around ... Basically we asked to speed up the process," he said.