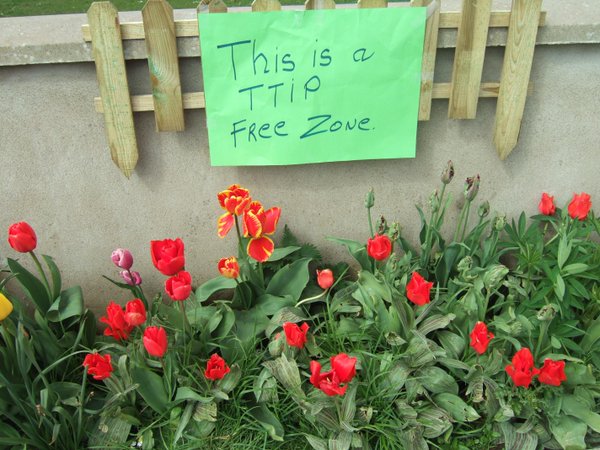 A network of European cities and regions have called on the EU to suspend current trade negotiations and to refrain from ratifying the recently finished EU-Canada trade agreement.

More than 40 mayors and municipal representatives expressed concern over the EU’s major trade negotiations in a declaration on Thursday (21 April) following a meeting in Barcelona titled Local Authorities and the New Generation of Free Trade Agreements.

The EU trade negotiations that raised major concerns were the Transatlantic Trade and Investment Partnership (TTIP) with the US, the Trade in Services Agreement (Tisa) between the EU and 22 countries around the world, and the Comprehensive Economic and Trade Agreement (Ceta) between Canada and the EU.

“We demand that current negotiations on TTIP and TiSA be suspended until the concerns of local and regional governments have fully taken into account in the ratification in any of these treaties,” the Barcelona declaration said.

The document said trade was important for the wellbeing of citizens, but stressed that competitiveness and economic growth should not be the only criteria used to determine free trade agreements.

“We must defend trade which is fair, sustainable, and which upholds labour rights,” it stated.

Barcelona’s deputy mayor Gerardo Pisarello said the event was “a way for cities to raise their voices and to be heard”, adding that he feared the consequences of free trade treaties on local businesses and local public policies.

Barcelona city council declared itself a TTIP-free zone in October 2015, joining a network of around 1,600 cities, municipalities and regions across Europe that have made similar declarations.

The no-TTIP zones are mostly based in Austria, Belgium, France, Germany, the Netherlands, Spain and the UK. There are also a few in Ireland, Greece and Portugal.

“We want to be informed, we want to be heard on decisions that can be adopted in the European Union and that may affect the daily lives of our citizens,” Pisarello told the meeting in Hospital de Sant Pau, a cultural centre.

Martin Straker Welds, a councillor from the UK city of Birmingham, told EUobserver any treaty must be scrutinised by the unions and by local and national governments.

“The trade negotiations are about making profit for those people who already have a lot of money,” he said.

“Local councillors are here to protect the people who may not have a lot of money, but who need a lot of services and we do not want these services sold off to multinational companies.”

Walter Mario Mattiussi from Mereto di Tomba, a small village in north-east Italy, told this website that the alliance of rural and urban authorities was vital to force the issue.

He said his aim was to create an ecological consolidated economy based on small family businesses, but feared that major trade agreements would ruin his plans.

The trade agreements would be like “a return to the Middle Ages where we would be like feudal zones” not able to decide for ourselves, he said.

He added that he would get in contact with the neighbouring municipalities in Italy to join in the Barcelona declaration.

Amelie Canonne from activist group AITEC, which is part of the no-TTIP campaign, said the role of municipalities was key to reach national governments, which have a say on the EU trade negotiations.

She also hopes that TTIP-free cities will get in touch with their partner cities in Europe and across the Atlantic to spread the message.

“I am very positive with this meeting. I felt a real motivation from the diversity of the people at the meeting,” she said, adding that the recent political switch to the left in the Barcelona city council was a great opportunity to host this first pan-European event on fairer trade negotiations.

US local authorities were also represented in Barcelona. Sharon Treat from the Maine Citizen Trade Policy Commission said opposition to TTIP and other corporate trade agreements was widening in the US as well.

She said the TTIP would “guarantee a knock-out blow to municipal policies that global corporations do not like, such as public services like safe water”. She referred to a recent case in Flint, Michigan, were public water supply was contaminated, she said, because local authorities only looked at profits.

“Progressive change happens from the grass roots up and not from the top down,” she said.

A new study from the Bertelsman Foundation on public support for TTIP in the US and in Germany also came out on Thursday suggesting that support has plummeted.