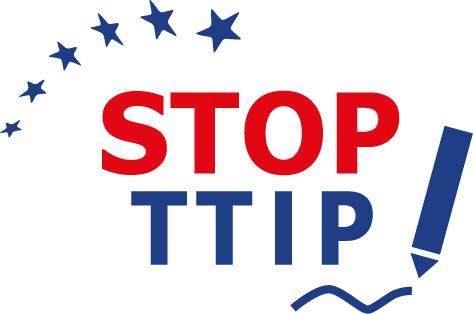 Today, Tuesday (15 July), the 47th European Citizens’ Initiative (ECI) has brought forward its motion for registration at the European Commission. The initiative “STOP TTIP” asks the EU Commission to recommend to the EU Council of Ministers to repeal the negotiating mandate for the Trade Investor Partnership (TTIP) and not to conclude the Comprehensive Economic and Trade Agreement (CETA) either. Behind the initiative are standing nearly 148 organisations from 18 EU member states. In Germany, the organisations Attac, Campact, Friends of the Earth Germany (BUND), More Democracy (Mehr Demokratie e.V.), Environment Institute Munich and the Nature and Biodiversity Conservation Unit (NABU) coordinate the preparations. Amongst many others, Transparency International Germany, Greenpeace Luxembourg, 38 degrees (UK), War on Want (UK), Unison (UK), and Tierra (Friends of the Earth Spain) belong to the European coalition, which is growing constantly.

“The centre of our criticism is the democratic dimension of the planned agreement: rules, which have far-reaching consequences for 500 million EU citizens in 28 member states, are negotiated behind closed doors. This is what we oppose”, says Michael Efler, representative of the ECI’s citizens’ committee and spokesperson of the federal association More Democracy (Mehr Demokratie e.V.). In particular, he criticises the planned Investor-state dispute settlement (ISDS). These are rules concerning investment protection, which grant foreign investors far-reaching protection rights. If e.g. a national parliament passes a law, which would affect the investment and profits of a company, the latter would have the right to file a suit – however not in front of a public court but in front of a confidential arbitral court. Democratically legitimized decisions and constitutional procedures would be thwarted. “The plans on regulatory cooperation are dangerous as well. They would lead to a constraint of democratic control. That means: They would set up a sort of early warning mechanism for planned trade-related laws or regulations. It would allow the contracting party and lobbyists to voice their interest even before the parliamentary process. Unwanted regulations that could hamper market access could be prevented in this way”, Michael Efler explains.

John Hilary, executive director of the British organization War on Want and member of the citizens’ committee, further states: "The TTIP agreement should not be understood as a treaty between two competing trade partners, the EU and USA. Instead, it is about the common attempt of multinational companies on both sides of the Atlantic to break open markets at the expense of consumer protection, food safety, environmental provisions, valuable social standards, regulations on the use of toxins or regulations on bank safety." Open calls for tender on public services are to be opened for the application of transnational companies as well. "One concrete example can be found in the different principles underlying consumer and environmental protection in the EU and the US," Hilary emphasizes. "The precautionary principle, which is used in the EU, ensures stricter regulations regarding, for example, the approval of chemicals. Through TTIP, however, a company could gain the right to register its product in the US and to place it on the European market afterwards." In US markets, the ’ex-post’ approach applies. This means that only when the harmfulness of a product has been explicitly proven, it is taken off the market. The obstacles for approval are therefore lower at the beginning, Hilary concludes.

Susan George, President of the Board of the Transnational Institute Amsterdam (TNI), honorary President of ATTAC-France and member of the ECI’s committee explains that hundreds of bilateral and pluri-lateral trade and investment agreements have already been signed – but the TTIP is exceedingly dangerous because it has been prepared by transnational corporations for 20 years. These huge companies have shaped the content and become an official part of the TTIP process at the invitation of governments, to the exclusion of all other citizens. However, this treaty can be defeated as was the case for the Multilateral Agreement on Investment (MAI), also negotiated in secret which was beaten in 1998 by a strong citizens‘ movement, partly because it contained the same exorbitant rights for corporations as the TTIP, such as the Investor to State Dispute System (ISDS) allowing them to sue governments in private tribunals for damages if they consider that a government decision would interfere with their present or even hoped-for, future profits. The companies thus seek to privatise not only the judiciary, but also a substantial part of governments’ legislative functions by taking over decisions on regulations and standards. They could even intimidate the executive branch with the threat of a barrage of lawsuits if it tried to improve laws concerning banks, labour, the environment, change, food safety, health, etc. “The TTIP is a grave threat to democracy – the ECI wants democracy, not ‘corporatocracy’”, George concludes.

Since 1 April 2012, citizens of EU states have the possibility to request a legislative act from the European Commission: the ECI. At the same time a successful ECI forces a hearing at the European Parliament. For an ECI to be successful, at least one million signatures must be collected. Moreover, country-specific quorums must be achieved in at least seven EU member states. Further facts on the planned European Citizens’ Initiative:

You can find the wording of the ECI here: www.stop-ttip.org/registration

Each ECI needs a citizens’ committee consisting of seven members. You can find information about the members here: www.stop-ttip.org/members

The start of signature collection for the anti-TTIP-ECI is planned for September this year. You can find a detailed time schedule here: www.stop-ttip.org/schedule

More Democracy (Mehr Demokratie e.V.) has commissioned an independent legal opinion, which reviews the legal legitimacy in advance. It comes to the result that ECI is admissible. You can consult the legal opinion here: www.stop-ttip.org/legal-opinion

If you wish to be updated on the ECI you can subscribe to the ECI’s press mailing list by contacting Regine Laroche, Mehr Demokratie e.V. ([email protected]).