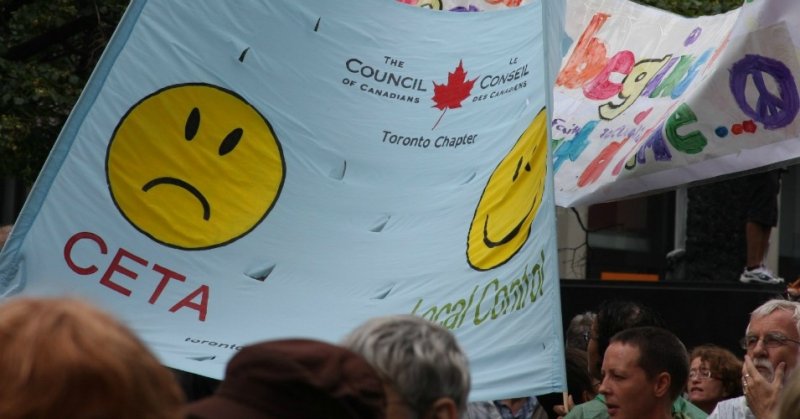 The European Commission has denied reports that the German government has threatened to put the brakes on the free trade agreement between the EU and Canada.

Officials from both sides are set to meet in Canada this Friday (26 September) in order to finalise the text of the Comprehensive Economic and Trade Agreement (Ceta), after the deadline for amendments closed on 12 September.

Reports in the German press] have claimed that the country’s Federal Minister for Economic Affairs and Energy Sigmar Gabriel "has apparently pulled the emergency brake in Brussels and prevented the conclusion of the Ceta agreement", allegedly due to concerns over "investor arbitration, but also the provision of public services and the liberalisation of services".

"I’m not aware of any delay in the process of ratification of the EU-Canada trade deal," he said.

"The reports in the German media that you mentioned are inaccurate. The ratification goes exactly as planned, meaning: announcement of the end of the negotiations, legal verification and translation to all EU official languages, then approval by the EU Member States in Council and vote in the European Parliament."

Deutsche Welle reported that German officials continue to have concerns over certain elements of Ceta and the agreement which is under negotiation between the US and the EU, the Transatlantic Trade and Investment Partnership (TTIP).

The crux of much of the opposition to Ceta and TTIP lies in the controversial investor-state dispute settlement (ISDS) clause, as well as the "undemocratic" manner in which negotiations have taken place behind closed doors.

Leaked documents show that Ceta contains the ISDS clause, a commonplace mechanism of free trade agreements, which grants a foreign investor the right to initiate dispute settlement proceedings against a foreign government, pending the results of a public consultation.

It is understood that the German government has raised these concerns with the European Commission, forcing the outgoing trade commissioner Karel De Gucht to remove ISDS from the TTIP negotiations earlier this year.

The fact that Ceta seemed to be moving towards being signed prior to the results of the European Commission’s public consultation into ISDS (albeit with reference to TTIP) angered many political and campaigning figures.

The formal accession of Ceta, which supporters claim will add billions to the economies of both Canada and the EU, relies upon each of the EU’s 28 national parliaments ratifying it, meaning that should the Germans decide not to proceed, it could place the agreement on ice, permanently.

Any delay that may result from the reported German opposition, however, is unlikely to derail the agreement permanently, say experts.

"In terms of Ceta, I think the delay is probably tactical in order to get some minor concessions and/or a product of internal divisions within SPD and within the grand coalition as a result. Representatives of the German government have said they can live with the agreement, so I think the deal will in most likelihood go ahead," says Dr Gabriel Siles-Brügge, a lecturer in politics at the University of Manchester who has campaigned for more transparency and more accurate representation of the benefits of free trade agreements.

The deadline for amendments to the agreement closed on 12 September and after it is finalised, it will be issued to member state parliaments who are free to debate it, but not to make changes.

It will be voted upon by the European Parliament, however, MEPs will not be able to suggest amendments, simply vote for or against the agreement. It is understood that neither MPs nor MEPs have seen the text. If the UK’s Trade Minister Lord Livingston wishes to see the text, he must go to a private room to view the documents, without making any copies.

Similar accusations have followed the negotiations on TTIP, with the new French Secretary of State for Foreign Trade Matthias Fekl becoming the latest European official to call for documents to be disclosed.

In a letter, he wrote: "One of my very first decisions following my nomination was to write to the European Commission and ask them, in the name of France, to implement total transparency on trade negotiation mandates, particularly with the United States. Secret negotiations can no longer be allowed to take place."

TTIP negotiators will reconvene for the seventh time in Chevy Chase, Maryland between 29 September and 3 October and it remains to be seen if ISDS will be on the agenda, having been temporarily removed from discussions by De Gucht earlier this year.