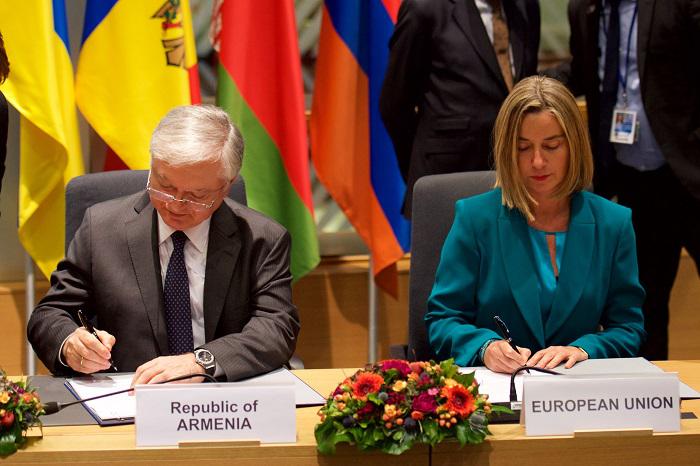 STRASBOURG — The European Parliament voted overwhelmingly on Wednesday to ratify a landmark agreement aimed at deepening the European Union’s political and economic relations with Armenia.

It also adopted a separate resolution welcoming the recent peaceful transition of power in Armenia and calling on the new authorities in Yerevan to implement wide-ranging reforms promised by them.

“This final vote in the European Parliament sends a strong message of support to the Armenian citizens,” said Laszlo Tokes, a rapporteur for the EU’s legislative body.

“The EU is ready to support the reform efforts to which the new government has committed,” he added. “We encourage them to continue combating corruption and reforming the electoral framework.”

The Comprehensive and Enhanced Partnership Agreement (CEPA) was backed by 573 votes to 50, with 45 abstentions.

The 350-page agreement signed last November commits the Armenian authorities to carrying out political reforms that will democratize the country’s political system and boost human rights protection. They must also gradually “approximate” Armenian economic laws and regulations to those of the EU.

The CEPA is a less ambitious substitute for an Association Agreement which Armenian and EU negotiators nearly finalized in 2013. Then Armenian President Serzh Sarkisian scuttled the signing of that agreement with his unexpected decision to seek his country’s membership in a Russian-led trade bloc.

The EU’s foreign policy chief, Federica Mogherini, stressed the importance of the “historic” CEPA when she addressed the European Parliament on Tuesday. She described it as one of the EU “instruments” for supporting the new Armenian government’s “very ambitious reform agenda.”

“Our first contacts with the new government have been really very productive,” Mogherini said. “The atmosphere at our first meeting could not have been more positive and friendly and constructive.”

Mogherini referred to the first session of the EU-Armenia Partnership Council, a body tasked with overseeing the CEPA’s implementation, held in Brussels on June 21. She chaired the meeting together with Armenian Foreign Minister Zohrab Mnatsakanian.

“I really personally believe that all Armenian parties understand very well that a partnership with the European Union is something vital for the country,” Mogherini told EU lawmakers.

The Armenian parliament ratified the CEPA in April, paving the way for the deal’s provisional entry into force last month. Speaking in Brussels, Mnatsakanian called on EU member states to also quickly endorse it. Several of them have already done so.

The new partnership agreement is not the end point in terms of EU-Armenia cooperation, but a tool to promote domestic reform and its implementation, says a separate resolution, adopted with 598 votes to 52 and 27 abstentions. MEPs call on Armenia to make significant progress on how elections are run, the independence of the judiciary, the fight against corruption, money laundering, tax evasion and abusive oligarchic control and on media freedom. Effective implementation of these key reforms may unlock further prospects for cooperation, including the opening of a visa liberalisation dialogue, MEPs add.

MEPs regret that the Agreement cannot include the removal of tariff barriers, due to Armenia’s membership of the Eurasian Economic Union. However, they stress that it does not prevent the EU from being Armenia’s main trading partner and first donor, thus demonstrating that the EU does not expect its partners to privilege deeper relations with the EU at the expense of their relations with third parties.

They also call on the Commission to ensure that EU assistance to Armenia is not directed towards sectors affected by Russian sanctions in the EU.

MEPs applaud the citizens of Armenia on the recent peaceful transition of power and welcome the restraint shown by the law enforcement bodies, though some unjustified arrests of peaceful demonstrators raise concerns. They congratulate Nikol Pashinyan on his election as the new Prime Minister of Armenia and look forward to increased cooperation.