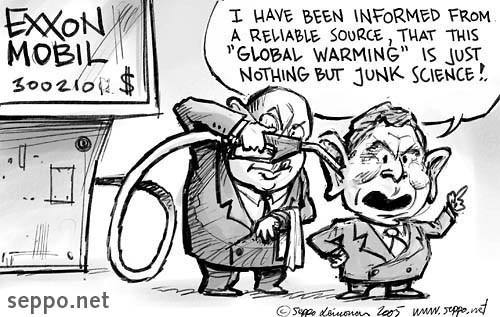 Public outrage has been brewing about the fact that ExxonMobil — one of the the world’s biggest oil companies — knew about climate change as early as 1977 and yet promoted climate denialism and actively deceived the public by turning “ordinary scientific uncertainties into weapons of mass confusion.“

A little-known fact, however, is that while ExxonMobil was misleading the public about climate disruption, it was also using trade rules to increase its power, to bolster its profits, and to actively hamper climate action.

When you take a closer look, it’s plain to see. Here are just three examples:

1. ExxonMobil uses private trade tribunals to challenge policies that cut into its profits.

In November 2004, a Canadian government body enacted a policy requiring oil companies to allocate a portion of their revenues gained through offshore drilling in Newfoundland and Labrador — Canada’s poorest province — toward financing local research and development. ExxonMobil didn’t like this new policy because it would cut into its record profits, so in 2007 it used rules in the North American Free Trade Agreement (NAFTA) to sue Canada in a private trade tribunal. The lawyers, unaccountable to any domestic legal system, sided with ExxonMobil and ordered Canada to pay the oil giant $14 million in compensation for the policy.

ExxonMobil is a member of American Fuel and Petrochemical Manufacturers. In 2013, that association lobbied the U.S. Trade Representative (USTR) to use the Transatlantic Trade and Investment Partnership (TTIP) negotiations to pressure the EU to weaken a policy designed to encourage European fuel suppliers to switch from high-carbon fuels, such as those derived from tar sands, to lower-carbon fuels. As I wrote about previously, USTR heeded this advice and used the TTIP negotiations to “press the [European] Commission to take the views of stakeholders including U.S. refiners, under consideration.” The EU soon did just that by rolling back the proposed policy and agreeing to fuel quality rules that ignored the additional climate emissions from tar sands oil — just as ExxonMobil’s trade association had asked for.

Declassified documents reveal that ExxonMobil has colluded with the European Commission on TTIP negotiating strategies. The documents show that one of ExxonMobil’s biggest objectives for the deal is to require the U.S. Department of Energy (DOE) to automatically approve exports of liquefied natural gas (LNG) to the EU — the world’s third-largest LNG importer.

ExxonMobil has also openly advocated for the Trans-Pacific Partnership (TPP) for similar reasons. Under the TPP, DOE would be required to automatically approve LNG exports to Japan, the world’s top LNG importer. These automatic exports of LNG would facilitate increase global dependency on a fossil fuel with high climate emissions while incentivizing increased fossil fuel infrastructure and fracking.

While we can’t take back the previous decades of soaring climate emissions — decades when ExxonMobil was deceiving the American people — we can and must hold ExxonMobil accountable for their deception. We must also work together to stop these polluter-friendly trade deals, like the TPP and TTIP, that would allow corrupt companies like ExxonMobil to gain more profits via the destruction of communities and our environment.