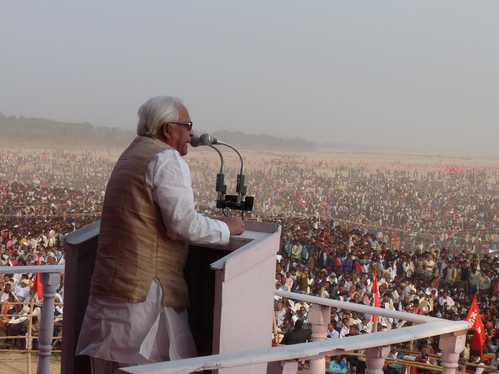 The All India Kisan Sabha has expressed its displeasure on the signing of a Free Trade Agreement with the ASEAN nations. In a statement issued by the farmer’s body they have criticised the centre for signing the FTA despite serious misgivings of state governments, peasant organisations and experts. Sectors like plantations, fisheries, textiles and light manufacturing goods will be seriously affected by this deal.

Some excerpts from their statement:

The Agreement also has identified certain products as Sensitive, Highly Sensitive and products to be put in the Negative list. The UPA claims that this categorisation will provide protection for the products mentioned in the list. The negative list contains 489 items which includes 303 items of agricultural sector, 81 items of textile sector, 50 items of auto sector and 17 items of chemical sector. The reports show that certain marine products - coconut, cashew, vanilla, nutmeg, coriander, cardamom, ginger, turmeric, copra, coconut oil, tobacco, natural rubber, certain items of textiles and auto products are in the negative list.

The Free Trade Agreement will adversely affect the interests of the peasants who are cultivating coconut, tea, coffee, pepper etc, fishermen and workers who are working in textiles and light manufacturing goods. The FTA will adversely impact these sectors in many States and is bound to open the floodgates for cheap imports from the ASEAN and hurt domestic growers of tea, coffee, cashew, coconut, oil palm, rubber, spices and other plantation items. For products not in the Negative list, duties will be reduced in a phased manner and brought to zero by 2019. On 5 items- Tea, Coffee, Pepper, Crude Palm Oil and Refined Palm Oil which are on the Highly Sensitive list there will be a partial duty cut in 2009. The reports show that the reduction will be made from the prevalent 2005 rate. The prevalent rate for CPO is 80 per cent, for RPO is 90 per cent, for coffee and black tea is 100 per cent, for pepper is 70 per cent. As per India’s commitment for tariff reduction by 2019, the tariff rate of CPO will be reduced to 37.5 per cent, for RPO to 45 per cent, for tea and coffee 45 per cent, and for pepper 50 per cent.

The implications are bound to be more severe given the fact that our country is characterised by low levels of productivity and also exorbitant costs of cultivation. This will make it near impossible for our farmers to compete against the cheap imports. The productivity level of many of the crops is far higher in many ASEAN countries. Pepper productivity in Kerala [ Images ] is around 320 kg while Vietnam produces 1.2 tonnes and Indonesia 2.3 tonnes per hectare. Productivity of coffee in India stands at 765 kg per hectare while Vietnam produces 1.7 tonnes per hectre. The cost of cultivation is higher in India than what prevails in ASEAN countries. In such a situation, the reduction of tariff rates will increase import from ASEAN countries and effect steep fall in prices of agricultural crops. Already the peasants are suffering due to the steep fall in prices of crops and price fluctuations. This is also bound to adversely affect the plantation workers who already are living under precarious conditions.

The economy of States like Kerala, Karnataka and others involved with plantations sector and other commercial crops as well as in fisheries will be very seriously affected by the FTA. Even though coconut is in the negative list, import of palm oil is liberalised. The import of palm oil had already hit oilseeds production in India. The collapse of the Groundnut economy in the regions like Ananthapur in Andhra Pradesh which incidentally is among the highest suicide-prone regions and has witnessed many farmers taking away their lives is a case in point. The import of palm oil had already brought down the prices of coconut. The coconut growers in India already facing declining productivity in the wake of mite-infestation as well as the senility of palms will only be further hit by such a policy.

The import of cheap and inferior Pepper earlier had depressed domestic prices and led to acute distress for farmers growing pepper. The 20% duty cuts under the FTA for pepper will hit our farmers badly. The experience of the FTA with Sri Lanka [ Images ] on the Kerala economy especially on tea, pepper etc is an indicator of the possible consequences of the FTA. It is to be noted that the Wayanad region of Kerala which was hit by farmers’ suicides a few years back is heavily dependent on these crops and the fluctuating fortunes also have direct impact on human lives in the region. Karnataka which accounts for 70% of the coffee produced in India is also bound to face serious problems.

The claim that the Free Trade Agreement also provides a bilateral safeguard mechanism to address sudden surge in imports and this will give some protection is not realistic. This safeguard mechanism of imposition of safeguard duties will exist only for a period of upto four years. As per reports, one aspect of the Negative list is that India had to maintain one consolidated Negative list of 489 items for all ASEAN countries, but individual ASEAN country can hold a Negative list of 489 tariff lines as per individual countries sensitivity to Indian imports. This also limits the possibility of exports from India. There are also reports that India has allowed to dilute the Rules of Origin to 35 per cent. This means that ASEAN members can add 35 per cent of the value to products imported from non-ASEAN countries and sell it in India. On the other hand, India’s Free Trade Agreements with ASEAN members like Thailand and Singapore have Rules of Origin pegged at 40 per cent. In fact, even the China-ASEAN FTA has a 40 per cent ROO standard. The dilution of ROO norms will adversely affect the interest of India. Many semi-processed products from non-ASEAN countries may undergo 35 per cent processing in ASEAN countries and will be eligible to be traded in India including agro-based products.

The UPA Government is clearly sacrificing the interests of the peasantry and the fishing community as well as a large number of workers in the textile and light manufacturing goods industry to please the corporate sector which is very keen to make investments in the ASEAN countries. The Central government has signed this agreement with ASEAN countries to give benefits to the big players in the services and investment sectors. There are also reports that the Government has approached the ADB for loan assistance to compensate industries that are likely to be hit by the FTA under the Asian Integration Adjustment Assistance Facility. However, similar concerns have not been exhibited towards the peasantry, workers and fishing community.

The Kisan Sabha demands that the UPA respect its mandate and safeguard the interests of Indian farmers, fishing community and workers, ensure full-fledged debate in Parliament and come out with a detailed Impact Assessment Document based on thorough study.

The Central government should also take immediate steps to provide adequate relief and compensation to the peasants, fishermen and workers working in such industries who may suffer because of this Agreement. The proposals for replacing senile coconut palms, improving social infrastructure in tea gardens, and to replace old coffee plants in plantations should be taken up on a war-footing. Additional assistance to deal with the mite infestation in coconut and also for pepper-wilt and other related problems as well as transfer of production-enhancing technologies is to be taken up immediately. More investments should be made by the Central government for increasing productivity/production in agriculture. Measures to strengthen the competitiveness in agriculture sector, fisheries and other areas should be taken up.

In the absence of measures that will buffer the impact of the unequal Trade Agreement, the farmers’ already in distress due to the agrarian crisis as well as the impact of global recession will be pushed deeper into indebtedness. The earlier cycle of such policies had witnessed suicides by thousands of farmers, textile workers etc and in the event of the repeat of such a situation the UPA will be culpable of perpetuating it. No Agreement that hinders the livelihood of thousands of our peasantry and poor will be acceptable and we shall uphold the interests of the affected sections to the core. The Kisan Sabha calls upon the Peasantry and other sections of society to rise in protest against this abject surrender and compromise of the interests of Indian people.