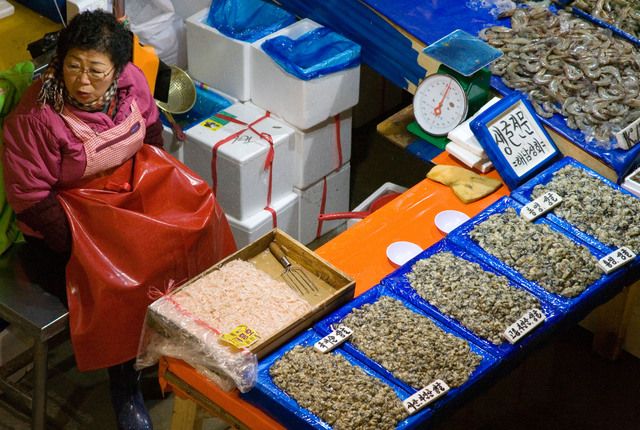 In an interview with Yonhap News Agency on Sunday, Lee Ju-young, the minister of oceans and fisheries, acknowledged that there were many products from which South Korean fisherman would suffer losses if tariffs on those are removed or reduced from the FTA.

The two countries are currently in the second phase of negotiations, scheduled to be completed by the end of this year, for the trade pact that essentially aims to open up each other’s markets for 90 percent of traded goods. Seoul is hoping to designate fisheries products in the "highly sensitive" category, which would exclude them from tariff elimination or reduction.

"We will make efforts so that our fisheries products can get that designation in order to minimize losses to our fishermen," Lee said.

"For industries that will be hurt by the FTA, (the Seoul government) will set up measures, including compensation for the losses and helping people change their line of business," he said.

Lee reiterated that Seoul will sternly counteract any attempts challenging South Korea’s ownership of Dokdo and Ieodo, a set of islands effectively controlled by Seoul but are claimed by Tokyo or lies in an overlapping air zone with China.

"Dokdo is our territory historically, geographically and by international law," Lee said about the outcroppings in the East Sea that Japan lays claims to. "We will act sternly to any claims denying it."

The fisheries minister said that although Ieodo is a reef and by international law cannot be claimed as territory, it clearly falls under South Korean control by EEZ demarcation.

China in November last year declared a new air zone overlapping that of South Korea and includes Ieodo. Seoul reacted to Beijing’s move the following month by announcing its new zone that covered the reef and other islands off its southern coast.

Lee expressed confidence in his ministry’s "e Navigation" project that is being reviewed by the finance ministry for feasibility. The project is a comprehensive maritime safety management system based on high technology.

"We will seek an early development of core technology for e Navigation and lead the global standardization," Lee said.