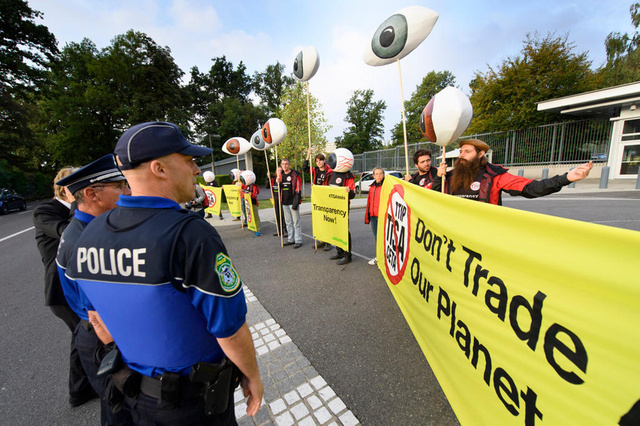 Public attention in the United States has focused on the threat to environmental and other public safeguards posed by the Trans Pacific Partnership (TPP) trade agreement with Japan and other Asia-Pacific countries as well as negotiations for a Transatlantic Trade and Investment Partnership (TTIP), the U.S.-European Union deal. But flying under the radar is a third massive deal, the Trade in Services Agreement (TiSA).

TiSA is under negotiation between the U.S., the EU, Japan and 21 other countries, which together comprise two-thirds of the world’s economy. TiSA is the brainchild of Wall Street banks that want to stop new financial regulations and begin rolling back the relatively mild safeguards adopted after the 2007 financial crisis. But TiSA would also have a devastating impact on environmental and public health policy.

TiSA covers services as opposed to goods like autos or dairy products. In other words, it covers almost any export that you cannot drop on your foot. Services, like banking or oil and gas services provided by companies like Halliburton, are the largest part of most countries’ economies, amounting to 80 percent of the U.S. economy and 75 percent of the EU economy, for example.

TiSA restricts new public interest safeguards and starts rolling back many existing ones that apply to the services sector. These restrictions would create a race to the bottom by preventing the strengthening and allowing the weakening of public interest regulations. TiSA also encourages the privatization of public services like municipal utilities and postal services.

The leaked TiSA text includes a “standstill” provision, providing that governments can protect some existing services regulations or allow others to be challenged. TiSA also includes a “ratchet” provision providing that any time a country later rolls back a services regulation, it is automatically locked in. This would make it difficult or impossible to re-regulate if deregulation leads to abuses, as for example when the U.S. adopted modest Dodd-Frank re-regulation after financial services deregulation by the Clinton Administration opened the door to Wall Street abuses that were a root cause of the Great Recession.

Unlike most international environmental agreements, the TiSA, TPP and TTIP all provide for effective enforcement of their provisions. International trade tribunals, consisting of pro-corporate trade lawyers, could impose stinging sanctions, such as higher tariffs and loss of intellectual property rights, to enforce TiSA’s egregiously deregulatory obligations.

1. TiSA is a clear threat to public services and regulation related to water

Boone Pickens and large corporations such as Suez are attempting to seize ownership of water resources and water services from the public. This would turn water into a commodity to be traded in international commerce, just like oil, and deny access to water to those who cannot afford the market price. TiSA could stand in the way of government action to block these efforts to deny people the UN-recognized right to water needed to sustain family farms, basic sanitation for good health and life itself.

3. TiSA is likely to stand in the way of public services and regulations related to public health and pollution

Impacted services and regulations would include those related to sewage, water sanitation, solid waste, hazardous waste, and nuclear or radioactive waste disposal and transportation — to say nothing of air pollution.

4. TiSA is a threat to policies related to agricultural services

TiSA might well hinder future regulation services using technologies like cloning, GMO seeds and gene editing — including the gene drives discussed elsewhere in this issue [of the Friends of the Earth Newsletter: see link below]. TiSA also might be used by affiliated service providers for global meat giants like Smithfield to challenge new regulations to protect the environment, public health and especially the climate. Eating beef, in particular, carries a carbon footprint many times the size of meats like chicken. And all meats are generally more harmful to the climate than plants.

TiSA could constrain government regulation of private forestry services such as contract work for logging, forest management and tree planting. It could encourage privatization of government forest services. TiSA, therefore, might well hobble government efforts to stave off global warming driven by massive deforestation around the globe.

Bill Waren is senior trade analyst for Friends of the Earth.