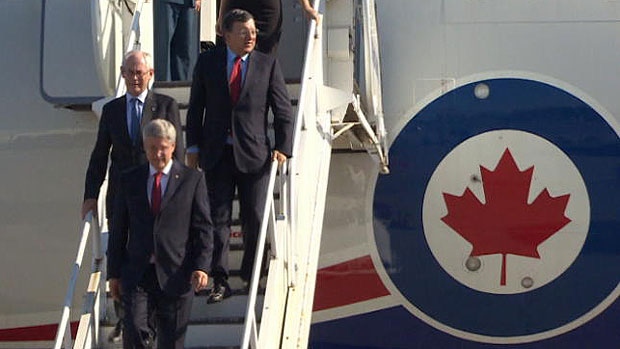 Prime Minister Stephen Harper’s offer of a free ride home for visiting European leaders — at a cost of more than $300,000 — is raising eyebrows on both sides of the Atlantic.

Already, opposition politicians in Canada have called the use of a Canadian A310 Airbus to ferry the visitors home an "outrageous" waste of taxpayers’ money. Now, there are complaints in Europe that the trip violated the European Union’s code of conduct, and that the excuses offered for the free ride were bogus.

After a ceremonial welcome in Ottawa and a signing ceremony, they planned to fly commercial back to Brussels that night. However, they were persuaded to stay for a late addition to the schedule — a business reception in Toronto.

’It didn’t cost a euro for the European taxpayer, that’s for sure’

Pia Ahrenkilde Hansen, European Commission spokeswoman To get them back to Brussels on schedule, Harper offered the Airbus he normally uses of foreign trips — which costs over $22,500 an hour to run. Officials were told this was necessary so that Van Rompuy and Barroso could get to a planned Saturday meeting.

But in Germany, where the free trade deal is under attack, there are complaints that there actually was no Saturday meeting and no reason for the rush to get home. Jens Geier, a German Social Democrat member of the European Parliament, says the two leaders had no engagements until the following Monday — something confirmed by the European Commission.

Geier also says there were Friday night flights to Europe from Toronto, and that accepting gifts over a value of 150 euros is "untersagt" — forbidden — for EU officials.

’Unusual,’ but ’no conflict of interest’

A spokeswoman for the European Commission, Pia Ahrenkilde Hansen, agreed that the free flight was "rather unusual," but insisted there was nothing unethical about it.

"It was a practical arrangement offered by the Canadian government," she said, "There is no gift, there is no conflict of interest."

Hansen added that there was no personal benefit to the two leaders — rather, the arrangement saved the EU money.

"This was a flight which was put at their disposal by the Canadian government to the two EU leaders. You know, the cost, that’s for them to inform about. It didn’t cost a euro for the European taxpayer, that’s for sure."

As for the Friday evening reception in Toronto, she said, "The Canadian government very much wanted President Barroso and President Van Rompuy to participate in that event."

The backdrop for the complaints seems to be unease in Germany about the so-called investor-state dispute settlement provisions in the CETA (Comprehensive Economic and Trade Agreement), intended to protect investors by allowing foreign corporations to sue governments for actions that hurt their interests.

It didn’t help that, to some German eyes, Barroso went to Canada, dismissed German concerns about the CETA, and simultaneously accepted an expensive ride home from the Canadians.

Barroso told reporters ​in Ottawa ​that German complaints would not block the deal. In fact, he said, "The country that is going to benefit the most from this agreement is indeed Germany."

But that’s not how it looks from the other side of the Atlantic, said Gregory Thomas, director of the Canadian Taxpayers Federation.

"It’s been actually damaging to Canada’s position in the negotiations because it’s antagonized the Germans," said Thomas.

"Whenever you start throwing money around in the context of trade negotiations, it’s never helpful because it undermines public confidence both at home and overseas about the process."