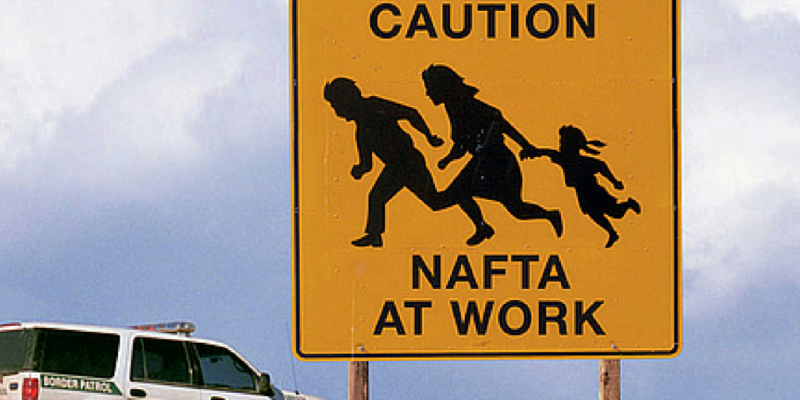 U.S. trade negotiators continue to claim that free trade agreements help to support security, but in reality, they exacerbate the root causes of instability in the Mesoamerican region, IPS’s Manuel Perez-Rocha said in a speech at the AFL-CIO conference on U.S. trade policy.

Today the Northern triangle of Latin America is one of the most dangerous places in the world. In Mexico alone, there are more than 27,000 people reported missing on top of the 100,000 killed in the so-called war on drugs, Perez-Rocha said.

“Instead of bringing prosperity, [NAFTA] took away domestic protections from Mexico’s food production, leading to greater food insecurity and the widespread loss of our agricultural livelihoods,” he said.

Perez-Rocha said the abandonment of national production of food to favor imports, brought on by NAFTA, has meant the fall of production, employment, and income and the increase of inequality, poverty, and migration. He said this abandonment of the countryside by the government propelled the vacuum that has become occupied by organized crime.

“NAFTA is responsible,” he said. “for the increase of violence and public insecurity in the countryside and in all of Mexico.”

Ten years later, CAFTA was imposed in Central America, ushering in what Perez-Rocha called “the deterioration of economic conditions for working people and major new threats to the environment.”

Perez-Rocha offered one of the most egregious examples in the case of the Pacific Rim mining company which is demanding millions of dollars from El Salvador for protecting its environment.

“This is a deep humanitarian crisis that should be recognized as such,” he said. He quoted U.S. Vice President Biden as saying ‘confronting these challenges requires nothing less than systematic change, which we in the United States have a direct interest in helping to bring about.’

However, the proposal in the Alliance for Prosperity Plan does not address the roots of the crisis, Perez-Rocha said.

“The goal of the alliance, as we see it,” Perez-Rocha said, “is to attract foreign direct investment for the exploitation of natural resources.”

The alliance and agreements like the TPP, on top of the destruction already brought on by NAFTA and CAFTA, will only mean an acceleration of the race to the bottom for the region’s working families, further dislocation and displacement, and regional insecurity, he said.