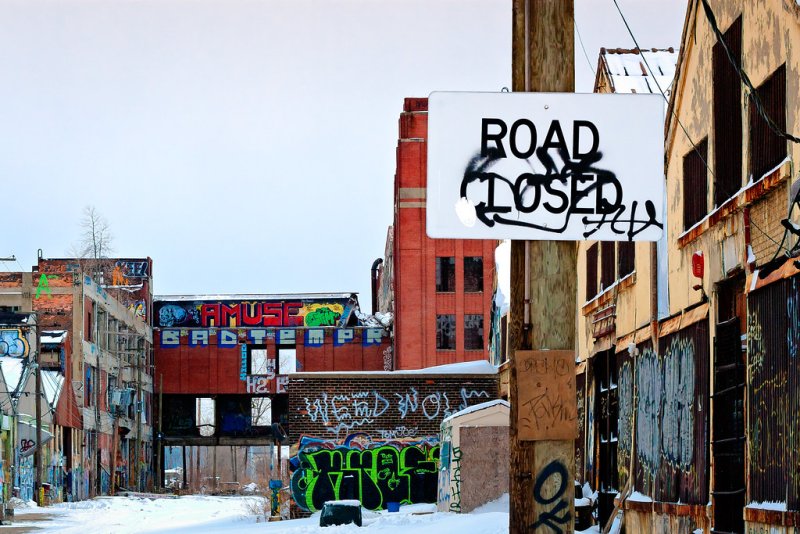 The economist Donald Boudreaux has said that “free trade improves efficiency and innovation.” He reasons that free trade, along with other market forces, shifts the workforce to “more productive uses, allowing more efficient industries to thrive” and bringing higher wages, infrastructure investment, job creation and a more vibrant economy overall.

Bourdreaux theorized that a growing trade deficit is actually a positive, signaling investor confidence. If a U.S. trading partner artificially suppresses its currency, the U.S. might see a larger deficit, “but this practice harms the trading partner, not the United States.”

Also, the assertion that trade deficits are not debt and are good for the economy is flawed. According to the Economic Policy Institute (EPI), trade deficits have eliminated nearly 5 million good-paying manufacturing jobs over the past two decades and 90,000 factories.

It is also well-known that free trade is increasing trade deficits. Trade deficits began in the late 1970s and have grown to $794 billion in 2019, an inconvenient fact largely ignored by politicians.

Economists seem to believe that we may lose jobs and some industries but in the aggregate free trade leads to more economic prosperity for everybody. What these assertions do not reveal is that to reach the growth and prosperity goal, manufacturing industries are sacrificed. For the last 30 years both Republican and Democratic leaders have systematically traded away the manufacturing industries and jobs of American workers in exchange for promoting the interests of American international investors.

NAFTA. By the 1990s, with the ascension of Bill Clinton to the White House, Democrats picked up the mantle of free trade. Republican President George Bush Sr. initiated the North American Free Trade Agreement in 1991, which extended open markets. But it was Clinton, a Democrat, who pushed a skeptical American public and an equally questioning Democratic Congress toward support for the NAFTA accord in 1993. When the North American Free Trade Agreement was passed, Clinton promised that NAFTA would increase the existing trade surplus, creating 200,000 new American jobs in its first two years, and a million jobs in five years.

But, according to the Census Bureau, by 2019 our trade deficit with Mexico was $102 billion and $27 billion with Canada. A report from the nonprofit consumer advocacy group Public Citizen said the Trade Adjustment Assistance (TAA) program showed that 845,000 manufacturing workers had lost their jobs and applied for assistance because of NAFTA

PNTR. In 2000, the U.S. began Permanent Normal Trade Relations, accepting China into the World Trade Organization “A few years after being sold on NAFTA, Americans were told that opening up our markets to China with a special deal that brought it into the World Trade Organization was a clever geopolitical strategy to pull China in the right direction.” After 19 years of trade, the trade deficit with China has grown from $83 billion in 2001 to $345 billion in 2019. The Economic Policy Institute shows that this deficit also cost us 3.2 million jobs from 2001 to 2017.

U.S.–Korea Free Trade Agreement/ (KORUS FTA). This treaty was first signed on June 30, 2007, with a renegotiated version signed in early December 2011 by President Obama. For the United States, the treaty was the first free trade agreement (FTA) with a major Asian economy and the largest trade deal since NAFTA in 1993. In a White House press release, Obama predicted 70,000 new jobs from the bilateral U.S.–Korea Free Trade Agreement he signed in 2011, but by 2015, we had lost 95,000 jobs. In addition, data from the Census Bureau show that the trade deficit with South Korea went from $13.2 billion in 2012 to $21 billion in 2019.

President Barack Obama, when pushing for the TPP trade agreement, stated, “While some communities have suffered from foreign competition, trade has helped our economy much more than it has hurt.”

Since Clinton’s signing of NAFTA in 1993, the Democratic Party has believed that to keep Democrats in the presidency requires free trade and open markets.

Why did we think it would be good for America to allow all of our trading partners cheap access to all of our industries when they won’t give us the same access to their industries? A good example is the automobile industry. According to U.S. Secretary of Commerce Wilbur Ross, “The EU charges a 10% tariff on imported American cars, while the U.S. imposes a 2.5% tariff on imported European cars. Europe exports four times as many cars to the U.S., or 1.14 million cars per year. Why is this happening, and why has it been our policy for 40 years?”

This is only a partial list of the 7 million manufacturing jobs lost since 1979. In a previous article in Industry Week, I showed that 36 out of 38 manufacturing industries are declining in terms of employees and establishments.

According to the Economic Policy Institute, trade deficits have eliminated nearly 5 million good-paying manufacturing jobs and 90,000 factories. It is also well-known that free trade is increasing trade deficits. Trade deficits began in the late 1970s and have grown to $794 billion in 2019, an inconvenient fact largely ignored by politicians.

So, Who Really Benefits from Free Trade and a Growing Trade Deficit?

1. First on the list of beneficiaries are the multi-national corporations who have plants in Asia and get to export cheap products back to America.

2. Big retailers like Apple, Costco, Wal-Mart and Amazon, who get to import billions of dollars’ worth of goods.

3. Wall Street, which gets to finance the loans we must have with our trading partners to finance our deficits, so that we can keep buying their products.

4. The real winners: The wealthy in all of the trading countries—not the citizens, workers, or manufacturing.

What about the Future of American Manufacturing?

The idea that it is acceptable to outsource jobs and sacrifice manufacturing industries for the aggregate growth in the economy—or to import cheap products with a growing trade deficit because it best serves our consumers—is irrational. It is also irrational to believe that we can buy more than we can sell forever. “It is possible for free trade to maximize the wealth of a minority of individuals and the global community, while it destroys the nation and its social stability,” author Roger Simmermaker says in his book Unconstitutional.

He goes on to say, “Our 41 years of trade deficits have played a major role in the hollowing out of our manufacturing industry. We sacrificed the creation of our wealth, standard of living, tax revenues, and investment capital by transferring production to other countries by purchasing excessive quantities of imports.”

The only hope we have to save manufacturing is to change the idea of free trade and adopt a “fair trade” policy. To stop the decline of manufacturing, we need to consider the following:

1. Congress should work toward a national goal to eliminate the trade deficit and focus on balancing our trade budget.

2. The Trump tariffs with China are working and we need to continue to use them to slow the flood of cheap imports and move towards a balanced trade budget.

3. Another goal should be to reduce the value of the dollar because it gives all of our trading partners a 20% to 30% price advantage. A report by Coalition for a Prosperous America economists Steven Byers and Jeff Ferry suggests that a market access charge to manage capital flows could lower the dollar value and eliminate the deficit in five years.

4. Trump’s trade negotiator, Peter Navarro, has urged Congress to pass a Reciprocal Trade Act, which would allow the U.S. to impose reciprocal duties on all countries who have higher tariffs if they do not lower their tariffs and VATs. This is a good solution because all of our trading partners have tariffs that range from 4.2% to 14%. They also use value-added taxes that average around 17%, while the U.S. average tariff is 2.5% and we don’t have a VAT.

5. The U.S. trade enforcement law should treat currency under-evaluations as a countervailable subsidy and tariffs should be imposed on all currency manipulating countries: 13 countries, at last count.

Economists have not been honest about the fact that manufacturing industries are sacrificed to continue the illusion of growth and prosperity. If we are actually going to save manufacturing, we must begin to reduce the trade deficit. There is no other choice.

Michael Collins is the author of The Rise of Inequality and can be reached at mpcmgt.net