Discussions on a free trade agreement between India and the Eurasian Economic Union are at an advanced stage and an agreement could be reached as early as the end of the year, a top official of Kazakhstan in India said here on Thursday. 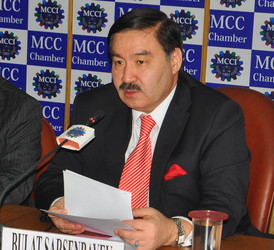 “Kazakhstan is part of the Eurasian Economic Union comprising Kazakhstan, Russia, Belarus, Armenia and Kyrgyzstan. Last year, India expressed interest in signing a free trade agreement with the Union. A special working group has been created and there are discussions. By the end of this year, hopefully, India will be ready to sign it,” Bulat Sarsenbayev, Ambassador of Kazakhstan in India, said.

According to him, the Kazakh National Railway Company was in discussion with the Adani Group to build or a buy a terminal at Mundra to connect Bandar Abbas in Iran with Mundra. “From Bandar Abbas, we have completed a railway project to Kazakhstan,” he said on the sidelines of a meeting with the Madras Chamber of Commerce and Industry (MCCI).

The Ambassador said the setting up of the terminal would reduce freight movement time between India and Kazakhstan. “The MoU was signed last year when Prime Minister Modi visited our country. Now, they (companies) should finalise the agreement and take some real steps.” The country was also planning to increase the number of flights to India. “Currently, we have seven flights a week between Delhi and Almaty. We have received permission from air authorities to increase this to 24 flights per week.”