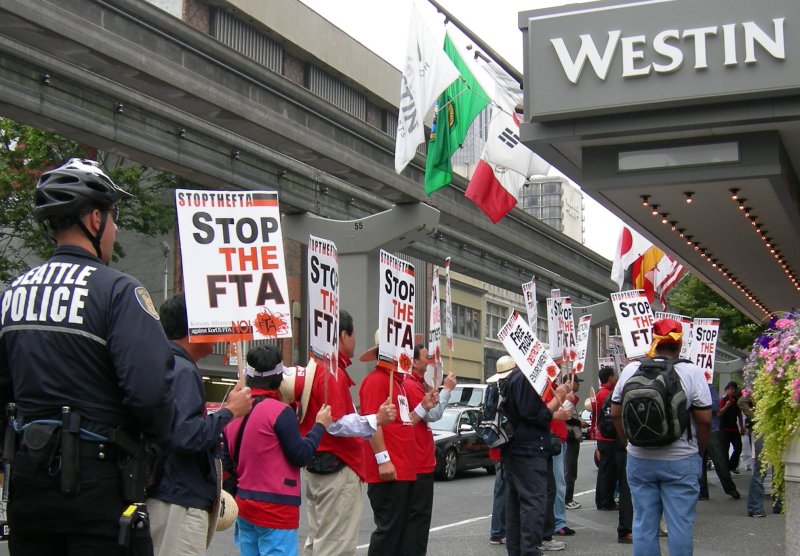 Ryu Mikyung is the International Director at the Korean Confederation of Trade Unions (KCTU). KCTU, and other Korean social movements, were strongly engaged in the resistance actions against the Korea-EU and the Korea-US free trade agreements (FTAs) in the late 2000s. Even though both FTAs were eventually implemented, KCTU continues to fight for workers’ rights at home and to engage with other groups at the international level.

In January 2021, the European Union (EU) published the conclusions of a panel of experts that was set up in 2018, as part of a dispute with South Korea under the ’Trade and Sustainable Development’ chapter of the EU-Korea FTA that came into force in 2011. The dispute was about several aspects of Korean labour law and its restrictive application of the right to freedom of association and the right to collective bargaining, which were deemed to be inconsistent with the obligations arising from the membership of the International Labour Organisation (ILO) and the ILO Declaration on Fundamental Principles and Rights at Work. The criteria for qualifying as a trade union were extremely narrow so that few groups were officially recognised as such, and all others were harassed by the police and the courts. The EU application also mentioned these repressive practices. The panel concluded that South Korea did not meet some of its commitments under the EU-South Korea FTA, but did not fail to comply with the agreement either.

bilaterals.org: What’s the background of the labour rights case brought by the EU against Korea under their FTA?

Ryu Mikyung: The case was started under the previous Korean government, which was very conservative and anti-union. From 2013, the then government decertified the teachers union on the ground that they allowed the union membership for dismissed teachers, which was a violation of the current law, the government insisted. So the teachers union couldn’t continue their daily operations and union activities. And the government employees union faced the same situation. The government didn’t give the certification for the union on the same ground - because they had the dismissed workers in their union. And all the dismissed teachers and dismissed government employees had been disciplined and dismissed because of their union activity, so it’s very controversial. After that, when the KCTU leadership went on strike against the government anti-labour policy, the government targeted the union leaders for organising illegal strikes and illegal demonstrations and so on. So that’s why the former KCTU president was detained and sentenced to three years in jail. While the repression of trade union activity was very high, the KCTU took all the actions we could do. So the filing of a complaint with the ILO was one of the ways we raised this issue at the international level. And the Committee on Freedom of Association of the ILO made various recommendations to the Korean government. They found that the existing law, including the provision which disallowed the union membership of the dismissed workers and other provisions, was a violation of international standards. This issue was also brought to the civil society forum on sustainable development under the Korea-EU FTA.This was raised by the Korean unions as well as the ITUC and ETUC and the NGOs which were part of the domestic advisory group of the Korea-EU FTA.The case continued for several years. The strong pressure from the trade unions in the European Union worked and finally the European Parliament adopted a resolution [in 2017, ed.]. Then the European Commission decided to trigger the provision under the bilateral dispute mechanism. So that’s the background.

And that is what led to Korea’s ratification of three of four fundamental ILO conventions?

Actually, at this moment, the candlelight movement for the impeachment of the former conservative Korean president occurred. After that, the new government declared themselves to be labour-friendly, and said they would respect labour in society. They declared that they would ratify the ILO conventions 87 and 98 [on freedom of association and right to collective bargaining, ed.] which are very fundamental, and convention 92 regarding forced labour. But when it came to ratify them, the government traded off the ratification with the deterioration of fundamental labour rights, in order to get the support from the employers’ organisation and the conservative opposition party. So the trade unions, including KCTU, insisted it is not appropriate and it’s another violation of international standards so if the government wants to ratify the conventions, they have to implement them properly. But finally the government pushed ahead with the retrogressive labour law as a trade off for the ratification, and the law was passed before the ratification [of ILO conventions] which was only approved recently at the Parliament. The harsh repression of unions, like the decertification of KCTU, is no longer happening under this government. But the Korean employers’ organisation, and the Korean companies, especially the large conglomerates like Samsung and Posco, are still very anti-union. So regardless of this political change, they continue to avoid unions in their companies or, even though we successfully established unions within the companies, the companies denied the legitimacy [of unions], and they don’t want to talk to unions and they don’t want to sit at the bargaining table, so the situation still continues.

To what extent does the revised labour law lower workers’ rights?

The revised labour law is retrogressive, which means it restricts the union activities. There are many workers in non-standard forms of employment, such as platform workers or self-employed. This law excludes those workers by excluding them from the definition of a worker, which limits the scope of the application of the law. Many nonstandard forms of workers cannot enjoy their fundamental rights.

The panel that examined the case ruled that “the fact that Korea has yet to ratify four fundamental ILO Conventions does not in itself serve as evidence of its failure to comply with the EU-Korea free trade agreement,” adding that the provision in the FTA was “aiming for an effort, not result.” What’s your take on this part of ruling?

After the panel of experts published their report, both the Korean government and the EU Commission claimed they’d won the case. Under the FTA, there are two kinds of obligations. One is that the parties should respect and promote the fundamental principles under the ILO Convention of 1998, in “law and practice”. The experts said that this part was violated by the Korean government because some provisions of the existing trade union act violates the principle of freedom of association. But regarding the second obligation that the parties should make an effort for the ratification of the ILO fundamental conventions, the panel found that the government had made the effort for the ratification, even though they said it’s not enough. It’s quite technical but the Korean government can argue that the revised labour law meets the international obligations of the government under the FTA. The panel’s ruling can be interpreted in any way, but our position is not the same so we will continue our argument in the sustainable development civil society forum, and the engagement between the civil society forum and the sustainable development commission.

In your opinion, can strong language on labour rights in FTAs mitigate the worst effect of trade liberalisation?

In the negotiation stage of the Korea-EU agreement, KCTU and social movements in Korea took a very strong position against the FTA. But now we have the FTA, and under it, companies have a much bigger say than trade unions.There are many provisions in the FTA which protect the corporate interests rather than labour rights. The dispute settlement process regarding labour rights is not sanction-based but dialogue-based, whereas some other chapters have much stronger language on dispute settlement which is a based on a legal process. We have to analyse which type of provision is effective for strengthening labour rights. Some organisations in Europe said that in the future FTAs should include strong sanctions for the violation of labour rights. And this should be analysed. In the context of Korea, this type of social rights and labour rights are not protected without sanction. But what kind of bilateral agreement is more effective is another question. We have also a Korea-US FTA that includes strong provisions on sanctions in case of violation of labour standards. But neither the Korean or the US government want to take any action under this chapter, as it is not easy to make use of this provision because they have to give some evidence that the violation of labour rights had a negative impact on trade relations between the two parties. Anyway, we believe strong provisions on social and labour rights are necessary but we’re not sure what would be the most effective type of provision. Today the Korean government has trade agreements with almost all the important trading partners so we have to think about how we can engage in this reality and how we can maximise the protection of labour rights.

Korea has also signed the RCEP last year. What are your main concerns about this agreement?

Actually the Korean government’s position in RCEP was replacing the US government’s role in terms of pushing the neoliberal agenda. In Korea, we have very strong provisions for the protection of corporate rights, including intellectual property rights, and the ISDS chapter in the Korea-US FTA. So RCEP in itself doesn’t bring more harmful effects than the existing Korea-US FTA. But there are many concerns about labour rights in other RCEP member countries and we have been working with trade unions and social movements in these countries.

In December 2020, China and the EU concluded the negotiations on an investment agreement that includes similar non-binding language on the protection of labour rights. Based on the experience of the Korea-EU labour rights case, do you think such a deal could lead to an improvement of labour conditions in China?

Without trade union engagement or activity, provisions on labour rights and environmental rights cannot be activated. Before KCTU joined the domestic advisory group [under the Korea-EU FTA], the Korean government believed Chapter 13 on trade and sustainable development was just an ornament of the FTA. It was not willing to really implement this chapter. And in the EU, I believe it was the same. Europeans never imagined they would trigger the bilateral dispute mechanism in relation to the violation of labour rights. So, in the case of China, I’m not optimistic, as there are no independent trade union movement in China. Who will trigger these provisions?