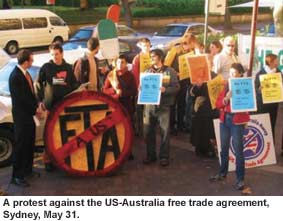 FTA leaves us second among equals

Access to the US market will be valuable, but Aussie consumers will lose, not gain, from the copyright provisions

WITH THE Australian Labor Party now all but on board, a few politicians will be hoping the Free Trade Agreement quietly fades into the background in the lead-up to the elections, but controversy will follow this deal for years.

This is inevitable, because no matter how carefully one writes such an agreement, the FTA is such a large and complex beast that no-one really knows how it will work until the rubber hits the road and we see the outcomes for ourselves. Rules will be interpreted in ways never dreamt of when they were penned. Rules will be bent and, I expect, broken.

Politicians shake hands over a deal between friends, but Australian businesses know that leaders come and go, situations change, debts fade from memory and, when the disputes begin, one party will carry 100 times more weight than the other.

If Australia deliberately breaks the rules in coming years, much gravity will be attached to the decision. Punitive action from the US is a truly scary prospect.

If the US breaks the rules, Australia will jump up and down and, if we shout long and loud enough, the US may suffer some small embarrassment, but nine times out of 10 you can bet that we will end up living with it.

When the draft FTA was first released in February, I went on record as saying that it mostly looked good for the Australian ICT community because of greater access to US government customers, but only time would tell if the reality lived up to the rhetoric.

The bit that smelled bad was the intellectual property provisions, which had the grubby fingerprints of US media and music giants all over them ($76bn US market opens up, The Australian, February 10)

I had in my mind the music giants, movie makers and games publishers, which have shown great determination to sustain regionalised pricing regimes and artificial zones for their products, fighting tooth and nail to quash activities such as re-chipping games consoles or DVD players to accept multi-region content.

Such practices appear to me artificial and unfair, and to fly directly in the face of the philosophy of free trade agreements, which I thought were supposed to break down barriers. As I read the preliminary text for this FTA I thought of the extra teeth it would give to companies trying to sustain those practices in Australia.

Since then it has become clear that the intellectual property provisions have brought fear and uncertainty in many places, most especially in pharmaceutical products and the implications for the cost of medicine in this country.

In the last couple of weeks Brian Greig, of the Australian Democrats, has articulated a number of concerns affecting the local software industry and Ross Gittins of the Sydney Morning Herald has pointed out the dangers for local software companies of being tied to a patent system routinely abused by US firms.

Upon reading the final text for the FTA, I see nothing to change my initial impressions. The market access should be valuable, but the sweeping copyright enforcement provisions in Article 17.4 leave me with a deep sense of foreboding: Australian consumers will lose, not gain, from them.

As to patents, the US system is most definitely broken, and it is only to be expected that US companies will be both better at exploiting it and more willing to wield the law as a weapon against their Australian counterparts.

I don’t accept the argument that closer alignment between the two patent systems will cripple the Australian software industry, or any part of it, such as the open source development sector, but it will certainly come at some cost to our software companies.

The intellectual property aspects of the FTA will be problematic for Australian ICT companies in the years ahead. The US music, media and software giants have form. They have demonstrated many times that they are willing to pull every lever available to them, fair and unfair, to sustain market power, secure a small advantage or simply survive. They will not hesitate to fully exploit any new weapon the FTA delivers into their hands.

Bruce McCabe is an independent analyst and managing director of S2 Intelligence.

source: Australian IT
Australia US
Subscribe to bilaterals.org weekly