Bilateral trade and investment agreements (FTAs) facilitate the privatisation, exploitation and contamination of biodiversity by global corporate interests. Biodiversity is so crucial for local peoples’ livelihoods and any “alternatives” to mainstream development models, and so intricately connected to local cultures, that these FTA impacts are of vital concern for many people’s movements.

FTAs push the privatisation of biodiversity by forcing countries to change their intellectual property laws to allow for greater private ownership of life forms than the WTO dictates. So countries often have to: (a) change national laws to make it possible to get patents on plants and animals; (b) set secure conditions for corporate ownership over plant varieties (seeds) by joining UPOV (International Union for the Protection of New Varieties of Plants); and (c) facilitate the patenting of micro-organisms by signing the Budapest Treaty.

Some Southern governments are even trying to use FTAs to set up intellectual property rights (IPR) for traditional knowledge related to biodiversity.

These changes in national laws turn what once "belonged" to communities into the exclusive property of transnational corporations (TNCs). So people must pay royalties to use "their" products. Saving and swapping seeds harvested from crops that are someone’s "intellectual property" becomes illegal. Farmers can be sued if patented genes are found in their field, even if they didn’t buy the corporate seed.

The purpose is to enhance profits and overall market control for agribusiness TNCs and their shareholders. The US will not sign an FTA without these provisions. The European Union (EU) pushes most of them as well. European Free Trade Association (EFTA) governments and Japan also use FTAs to get strong IPR over biodiversity in other countries.

FTAs are the front line of the push to allow patents on life today. The implications for farmers, and for food sovereignty, are tremendous. Patenting seeds means profound corporate control over the food supply. (Photo: Daniel Schwen)

FTAs make it easier for TNCs to exploit a country’s biodiversity in several ways. Bioprospecting - exploration and research into biodiversity seeking useful genes, genetic traits or processes for new commercial products - is included in these trade agreements, generally through rules on services and investment. Many new rights and freedoms are carved out for foreign companies: to come and do research, to export collected biological materials, to get property rights over research results, not to have to obtain legal domicile in the country that you’re bioprospecting in, etc. These can clash with, and trump, national biodiversity laws.

Costa Rica, for instance - the country that gave bioprospecting a name in 1991, when pharmaceutical TNC Merck signed a US$1 million deal with INBio (National Biodiversity Institute) to plough through Costa Rica’s forests in search of new medicines - has very careful rules about how foreigners can come and collect biological specimens. Those have been thrown to the wind by the Central America Free Trade Agreement (CAFTA), whose freedoms for US investors will now apply instead of the national biodiversity law. The Malaysian government was also concerned about this happening under its FTA with Japan, so it excluded matters that are governed by state or federal law from the FTA’s investment rules for bioprospecting 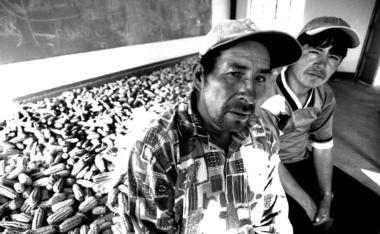 Farmers in Araypalla, Peru, in 2006: "Another area that will be liberalised with the FTA is the distribution of seeds and GM products. The massive arrival of GM maize from the US will prevent Latin American farmers from being able to protect their crops from genetic contamination and will deny people the right to know what they are eating" (Photo: Francisco Molino)

Globally, FTAs also make it far easier for agribusiness TNCs to set up production, processing and/or export facilities. This happens through the expansion of not only Northern companies but also Southern TNCs, such as Charoen Pokphand (CP) in Asia. By providing new rights and freedom to operate to these TNCs, and other financial incentives, firms are encouraged to set up operations locally. In the areas of agriculture and livestock, this usually means getting farmers to convert to specific seeds or breeds raised in high-tech monoculture conditions. For fishing, it can mean foreign firms gaining rights to exploit local fish stocks, a major concern with the Japan-Philippines FTA (JPEPA). Expansion of industrial food production destroys local biodiversity, either exhausting it or replacing it with a few corporate-approved, highly marketable and profitable breeds.

Increasingly, FTAs are used to ensure that countries cannot prevent the testing, commercial release and mass consumption of genetically modified organisms (GMOs). SPS (sanitary and phytosanitary standards) provisions determine what kind of health and safety norms can "interfere with" agricultural trade, which should otherwise be unfettered. As world food production becomes more delocalised, and global agricultural trade grows, countries are anxious to preserve their own health and safety standards. But the US vehemently insists that its standards shall apply to FTA partners. The EU is the same way about its own SPS standards, which it calls "non-negotiable". Meanwhile, TBT (technical barriers to trade) provisions limit the labelling rules.

The threat of mad cow disease is an important component of public opposition to the US-Korea FTA. Washington is aggressively using the FTA to reopen to the Korean market to US beef exports. (Photo: Chamsaesang)

Washington increasingly requires FTA partners to accept that any food or agricultural product cleared for export from the US is automatically approved for import. The US does all the testing, applying their own criteria, and the other government must agree to trust them. (Not even disputes are allowed.) Yet the US does not have a national, much less credible, food safety system, while it practices an agriculture that is extremely reliant on chemicals, GMOs and other controversial technologies such as irradiation. Korea banned the import of US beef as soon as BSE (mad cow disease) was discovered in the US, yet Washington made the re-opening of Korea’s beef market a precondition to any FTA.

Meanwhile, consumers’ movements, farmers’ organisations, and many others are trying to prevent food and agricultural systems from being contaminated by GMOs. Under pressure from Monsanto and others, the US government uses backdoor channels provided by FTA negotiations to force acceptance of GMOs by those countries still resisting them. It has pressured Australia, Ecuador, Thailand, Malaysia and Korea, among others, in this way. Public pressure in Australia prevented any immediate opening of the market to GM products from the US. But the two governments did agree to set up a committee to further the talks. Washington and Seoul allegedly signed a memorandum of understanding through which Korea would not discriminate against US goods in its implementation of the Convention on Biological Diversity’s Biosafety Protocol. This means that GM foods from the US should, as much as possible, not be labelled as such when sold in Korea, since that could hurt US food sales.