The government on Wednesday acknowledged that Pakistan has not benefited appropriately from the free trade agreements (FTAs) signed in the past including the one with China. These comments came from Secretary Commerce Azmat Ali Ranjha at a meeting of Senate Standing Committee on Commerce presided over by Senator Syed Shibli Faraz. 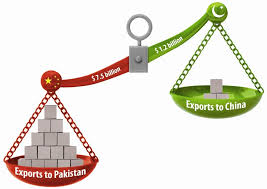 Senator Nauman Wazir, who attended the meeting as a special invitee, raised questions over the methodology and impact of FTAs on Pakistan’s economy and industry. He specifically mentioned the negative impact of the FTA with China on the Pakistani industry and exports. He was of the view that trade differential between China and Pakistan which was $4 billion in 2011-12 has now soared to $10 billion, which is alarming.

"What kind of FTAs we have signed with other countries which are having a negative impact on Pakistan’s industry," he added. Senator Nauman Wazir said that although these trade agreements were meant to mutually benefit trading partners, yet Pakistan has not benefited from any of these, adding that the ministry of commerce should come up with a specific mechanism for upcoming and under negotiation FTAs and also take the entire industry on board. He was of the view that Pakistan is in loss due to previous FTAs.

Chairman Standing Committee, Syed Shibli Faraz, also expressed dismay on the faulty FTAs, especially the pact with China. "What compels us to sign FTA? How do we monitor and safeguard our interests and whether we have capacity to negotiate FTAs? Do we take the stakeholders on board before signing the FTAs or just an isolated group of people negotiates pacts based on their own knowledge and experience?" Faraz added.

Secretary Commerce Azmat Ali Ranjha acknowledged that some of the concerns expressed by the committee are valid, adding that some of the FTAs Pakistan had signed are not effective from Pakistan’s perspective. There are multiple reasons for not taking advantage of these FTAs. Pakistan has not taken full advantage of concessions China has given to Pakistan. "Even if we had not signed the FTA, China’s manufacturing is so cheap that trade volumes would have gone up in any case," he continued. The secretary commerce was of the view that the commerce ministry has learnt a lesson and now it has given advertisements in newspapers to seek guidance and help from the real stakeholders. Talking about proposed FTA with Turkey, the secretary commerce said advertisement was given in the newspapers thrice to get stakeholders’ viewpoint.

"We are holding engagements at every possible level for structured discussions on the proposed FTAs to seek stakeholders’ viewpoint," he added. The committee gave the March 31, 2017 deadline to make Exim Bank fully operational. The committee was informed by a joint secretary of finance ministry that the board of the bank was now in place and Rs 7 billion have already been allocated for the Bank as DFID. He said a consultancy firm will soon be hired to prepare the manual and business plan for the bank. State Bank of Pakistan will issue a licence to the bank after all codal formalities are met. He further stated the position of Chief Executive Officer for the Exim Bank will be advertised afresh.

The chairman standing committee observed that the importance of this bank has not been understood as it should have been. He proposed that all the provinces should be given representation on the board. The matters about import of huge quantity of powdered milk, which is injurious to health, and of restrictions on the import of PVC scrap on the pretext of being hazardous were also discussed in the meeting.

The commerce ministry told the meeting that the powdered milk imported in the country is subject to standard control and is checked by the Pakistan Standard Quality Control Authority (PSQCA) under the ministry of science and technology. It was stated that commerce ministry is just related to the policy making and the implementation is related to FBR, PSQCA and provincial governments.

Regarding restrictions on PVC scrap, the committee asked the ministry to have a mechanism in the policy which is suitable for small manufacturers. The policy should be in line with the ground realities. The committee while discussing the Act of TDAP, observed that it is too widespread and its work ambit should be constrained. The commerce ministry told the meeting that inherently nothing is wrong with the Act and the TDAP is working towards rationalising the major objectives. The TDAP would share its recommendations in amending the act with the committee which will subsequently share its views.

Senator Kamal Ali Agha raised the issue of PVC scrape import which, according to him, has been restricted to extend benefit to a few giants instead of small manufacturers. He said one factory in Karachi has been extended financial benefit of billions of rupees in connivance with the officials of commerce ministry. The meeting was attended among others by Senators Karim Khawaja, Nauman Wazir, Usman Kakar, Rubina Khalid, Rahila Magsi, Mufti Abdul Sattar, Kamil Ali Agha and Haji Saifullah Bangash.