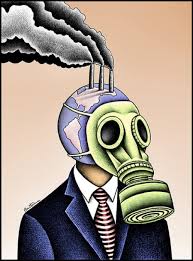 WASHINGTON, D.C. – As Congress prepares to go to conference to resolve differences between the House and Senate versions of the Trade Facilitation and Enforcement Act of 2015, a coalition of environmental and fair trade organizations are protesting the inclusion of language in the House version of the “Customs bill” that would explicitly prevent the United States Trade Representative from seeking to address climate change in trade agreements.

The provision in the House version of the Customs Bill, introduced by Chairman Paul Ryan (R-Wis.), would amend the Trade Priorities and Accountability Act of 2015, or “Fast Track” “to ensure that trade agreements do not require changes to U.S. law or obligate the United States with respect to global warming or climate change.”

350.org, Center for Biological Diversity, Center for International Environmental Law, Food & Water Watch, Friends of the Earth, Green America, Greenpeace USA, Institute for Agriculture and Trade Policy, League of Conservation Voters, Natural Resources Defense Council and the Sierra Club sent a letter to Senate Conferees and members from the House Ways and Means Committee asking them to reject the anti-climate provisions in the House version of the bill.

The organizations are concerned that the proposed provision poses significant risks to future progress on climate action. A policy brief by the Center for International Environmental Law explains these concerns in greater detail. The organizations write in their letter:

If accepted, it would limit the United States’ latitude to safeguard climate policies from trade attacks under existing and future trade agreements; it would inject even greater uncertainty into ongoing negotiations in the UNFCCC and other arenas by raising news questions about the scope of US negotiating authority; and it would raise serious challenges to the fulfillment of formal agreements like the US-China commitment to facilitate trade in clean-energy technologies, and global commitments to phase out fossil fuel subsidies.

The groups issued the following statements:

“The Customs Bill climate provision raises new and significant barriers to effective action on climate change even as the window for taking that action is closing rapidly. Accordingly, it should be rejected.” –Carroll Muffett, President, Center for International Environmental Law.

“This is another head in the sand approach to global warming. Putting aside the undisputed fact that this provision flies in the face of what is already happening in almost every other legal forum on climate and trade, including at the World Trade Organization itself, this Customs Bill directly harms Americans by taking away legal rights for citizens and businesses alike, all in the name of a far right ideological crusade. There is no rational justification for the trade/climate provision in this current legislation.” –William J. Snape, III, Senior Counsel, Center for Biological Diversity

“It is particularly disingenuous to say that climate change considerations shouldn’t fall under the purview of trade agreements when these trade deals are likely to explicitly set in place rules to liberalize the trade of fossil fuels. Conferees must reject this preposterous provision in the House Customs Bill.” –Luísa Abbott Galvão, climate and energy campaigner, Friends of the Earth.

“This anti-climate sneak attack must be stopped. The same Republicans that are endangering our future by denying the reality of climate disruption are now sneaking anti-climate language into trade bills. Trade deals like the Trans-Pacific Partnership already put our climate in peril, and this language would make already bad trade pacts even worse for our planet. Members of Congress who care about our air, water, and climate action must remove this damaging provision from the bill.” –Ilana Solomon, director of the Sierra Club’s Responsible Trade Program

“These provisions give new meaning to ‘climate denial,’ and they should be stripped.’’ — Scott Slesinger, Legislative Director, Natural Resources Defense Council.