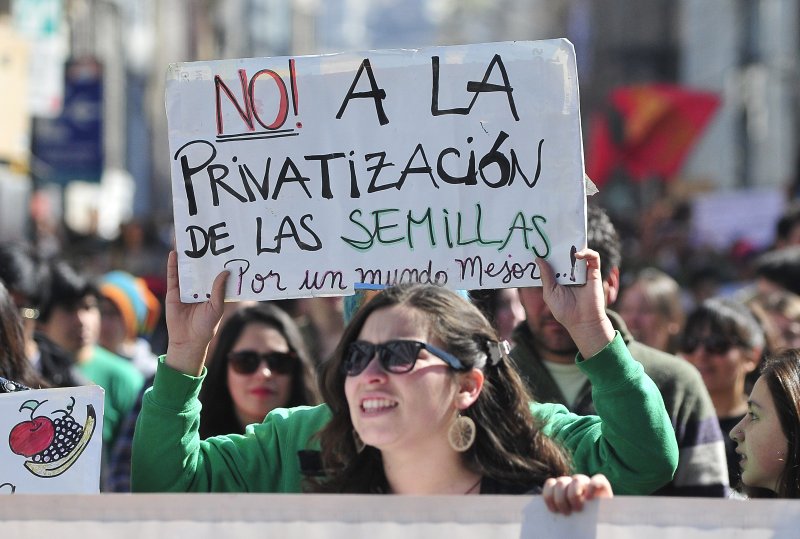 (loose translation from the Spanish by bilaterals.org)

The controversial "Law for the Protection of New Plant Varieties," also known as the "Monsanto Law", has been widely rejected by Guatemalan civil society. Groups say the rules will jeopardise food security and affect the farm economy.

On 10 June, the Congress of Guatemala approved Decree 19-2014 or the "Law for the Protection of New Plant Varieties" which led to an outpouring of criticism from various sectors of civil society.

This law, published on 26 June, protects the intellectual property of plant breeders deemed to have "created" or "discovered" new plant varieties, or genetically modified existing ones.

This way, the beneficiaries of the law — "breeders", which are typically companies producing transgenic seeds like the transnational corporation Monsanto — obtain property rights over the use of such varieties, in the form of plants or seeds.

In a publication, the Rural Studies Collective (Cer-Ixim) warned about the consequences of this "Monsanto Law".

They explained that under this law the possession or exchange of seeds of protected varieties without the breeder’s authorisation will be illegal and punishable by imprisonment.

It will also be illegal, and punishable by prison, to posses the harvest from such seeds or to save them for future plantings.

It also warned that Guatemala’s biodiversity will fall "under the control of domestic and foreign companies."

The adoption of Decree 19-2014 is part of a process that arises from the signing in 2005 of the free trade agreement between Central America and the United States (DR-CAFTA). Under the terms of CAFTA, the Central American country was forced to accede to the International Convention for the Protection of New Plant Varieties (UPOV).

The following year, the country moved to join UPOV and the Foreign Trade and Economics Legislative Committee prepared and submitted a bill to the International Union for the Protection of New Varieties of Plants for its approval.

According to the Rural Studies Collective, the proposal submitted to UPOV was never opened to consultation within the general public or among indigenous groups.

The Social Collective for the Right to Food shares this position. It found that the law violates the provisions of ILO Convention 169 "for example, by penalising the use of seeds for future plantings, thus truncating the natural cycle of life and plant reproduction," it said.

The growing opposition to the "Monsanto Law" comes from diverse sectors of civil society such as indigenous organisations, environmental groups, scientists, artists and members of Congress.

According to Mario Itzep, coordinator of the Indigenous Observatory, the law threatens the food security of the entire country.

He also found that the law violates the rights of indigenous peoples because it misuses seed produced by traditional cultures.

Meanwhile, Domingo Hernandez, a member of the Maya Ukux Be association, proclaimed that the "Monsanto Law" is an affront to indigenous cultures and that it will make people dependent on transgenic seeds.

The National Alliance for Biodiversity Protection has even said the law is unconstitutional "because it violates the rights of peoples. It will benefit transnational seed companies such as Monsanto, Duwest, Dupont, Syngenta, etc. "

"According to this law, the rights of plant breeders are superior to the rights of peoples to freely use seeds," the Alliance said in a statement issued in late July.

"It’s a direct attack on the traditional knowledge, biodiversity, life, culture, rural economy and worldview of Peoples, and food sovereignty," it added.

In a statement issued on 11 August, the Social Collective for the Right to Food pointed out that the "Monsanto Law" makes the rural economy and traditional practices of small farmers vulnerable.

It also noted that the country is not prepared to implement, regulate and control activities with genetically modified organisms (GMOs) or transgenic seeds.

"In our country there is no legislation regulating activities with GMOs, be it crop cultivation, harvesting, labelling, etc.," it added.

The Collective also finds that the adoption of this law is a violation of the "precautionary principle vis-à-vis well-founded concerns that certain products or technologies create a serious risk to public health or the environment."

Artists and television celebrities have joined an online signature campaign to reject the law.

Their petition is addressed to the President, Otto Perez Molina, via the Avaaz website, and argues that the law is unconstitutional.

"This law violates articles of the Constitution relating to the Protection of Individuals, Cultural Identity, Natural Heritage, Right to Health, the principles of the Economic and Social Regime, in addition to the obligation of the state to protect consumers," the petition states.

Changes to be proposed

Luis Fernández Chenal of the Patriot Party (PP) said that he would ask the Parliament’s Agriculture Committee to gather the opposing views and debate modifications to the law before it comes into force.