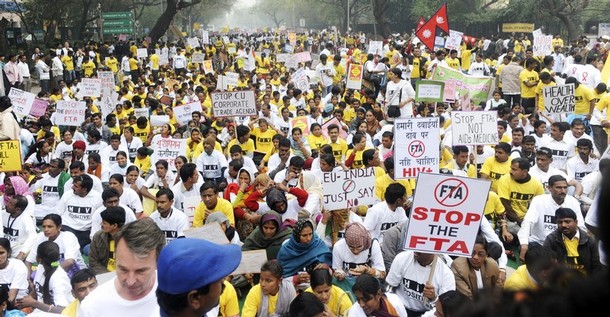 HIV patients say ‘no’ to IP provision on generic drugs

‘It will hinder access to quality, affordable generic medicines produced in India’

NEW DELHI: People in Asia living with HIV and who depend on affordable generic AIDS medicines to stay alive have impressed upon the Indian government to stand strong against European Union demands on the sensitive Intellectual Property (IP) chapter in ongoing Free Trade Agreement (FTA) negotiations.

The EU is pushing for harmful IP provisions to be included in the trade agreement that will hinder access to quality, affordable generic medicines produced in India, the “pharmacy of the developing world,” they pointed out here on Wednesday.

Affordable medicines produced in India have played a major role in scaling up AIDS treatment to more than five million people across Asia, Africa and Latin America.

Hundreds of people living with HIV from different parts of India and Asia marched to the office of the United Nations Special Rapporteur on Right to Health in New Delhi to highlight the grave danger this FTA brings to countless human lives in developing countries by preventing the production, registration and distribution of quality, affordable generic medicines. 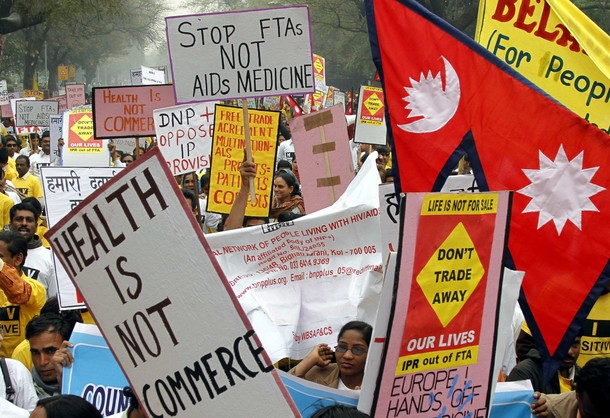 World Trade Organization rules already obligated India to grant medicines patents in 2005, which is preventing production and access to affordable versions of Hepatitis C drugs and the new generation of cancer and HIV/AIDS medicines, some of which have already been patented in India, the patients said.

Sharing their concerns at a press conference following the rally, the patient groups said there would be an adverse impact of trade agreements on their lives.

“We rely on affordable medicines made here in India to stay alive,” said Nepal-based Rajiv Kafle of the Asia Pacific Network of Positive People.

“We don’t want to go back in time when our friends and loved ones died just because they couldn’t afford the medicines. Don’t trade away our lives in the EU-India FTA,” he said.

The EU is pushing for IP provisions in the FTA that exceed what international trade rules require.

The most damaging clause that will hinder access to affordable medicines is the so-called ‘data exclusivity,’ which would act like a patent and block generic versions from the market, even for drugs that are already off patent, or do not merit a patent to begin with under India’s strict patent law.

The EU continues to falsely claim that these provisions will not harm access to medicines, the patients alleged.

The IP provisions the EU is pushing would make this difficult situation significantly worse, by imposing even more restrictions on the production of affordable generic medicines in the future.