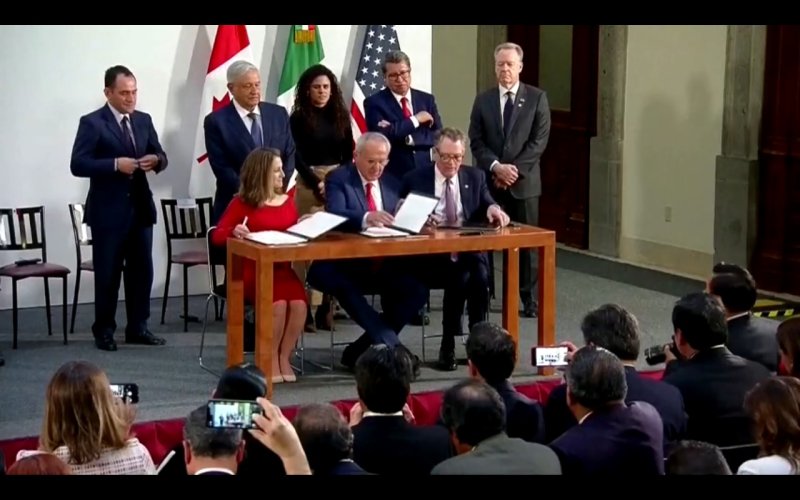 Approval of the trade bill, which now goes to the Senate for almost certain ratification, did far more than help Trump notch a major achievement: It marked a significant change in U.S. economic strategy toward the rest of the world.

For much of the last 70 years, throughout the Cold War and down to more recent times, Washington used America’s vast wealth and economic power to build friendships and alliances that bolstered national security.

That strategy included a fundamental commitment to free trade — opening the large U.S. market to products from all over the world. For the most part, American companies and their workers had to compete against foreign businesses and labor with little or no protection from the federal government. Advertisement

As Trump has long complained, that free-trade policy cost millions of American jobs. But leaders of both parties and economic experts considered it worth the price because it boosted American growth, generating many new jobs, and opened new opportunities for many U.S. companies to profit in a global economy. At the same time, it helped cement U.S. leadership in the world.

“In the post-World War II era, we were so much more powerful and so much richer than everybody else that we could improve the living standards at home and still give away the store on trade,” said Clyde Prestowitz, a former top trade negotiator in President Reagan’s administration.

“And we’re now culminated at a moment in which the cost of our old policy is really hard to bear, and so we’re de facto changing our policy,” he said.

The march toward free global markets with lower tariffs and other barriers always had exceptions. Beginning in the 1970s, U.S. companies began to complain about unfair competition: dumping of textiles and steel by foreign producers subsidized by their governments, for instance, or the sale of below-cost television sets, electronics and other consumer goods.

Reagan and his successors responded to these complaints with demands for import quotas and other measures. But overall, the United States remained committed to a broad strategy of free trade — relying on market forces and competition to determine outcomes.

While Republican business leaders complained about specific instances of what they saw as unfair tactics, such as currency manipulation and intellectual property theft, they largely remained committed to the overall free-trade strategy.

Democrats, responding to their union supporters, complained that American workers were paying a heavy price for a system that primarily benefited corporations and upper-income Americans.

The original North American Free Trade Agreement, which passed the House in 1993 by a margin of only 34 votes, highlighted the political unease about trade.

The agreement, however, fit squarely into that strategy of using trade in part for geopolitical reasons. It aimed to make Mexico more prosperous and hence make the United States more secure at a time when radical, leftist regimes seemed to be on the rise in Latin America. Economically, many saw it as a bulwark against rising competition from a unified Europe and Asian tiger economies.

NAFTA tore down tariffs and shaped North America into a powerful economic bloc — three-way trade in goods now reaches $1.3 trillion — but it was in many ways outdated in a global economy driven much more by technology and data.

Trump long attacked NAFTA, calling it one of the worst trade agreements ever and promising to renegotiate it. As president, he has attacked the whole system of free trade, undermining the World Trade Organization, which the U.S. helped create in the 1990s, and starting trade wars not only with China but with longtime U.S. allies such as Europe, Canada and Mexico.

He has enjoyed quiet but significant Democratic support on the issue. Witness the large bipartisan majority for the new version of NAFTA.

Renamed United States-Mexico-Canada Agreement, or USMCA, the measure won approval by the Democratic-majority House 385-41, a remarkable show of unity at a time of deep partisan acrimony.

Not that there wasn’t the usual jostling and one-upmanship which have characterized relations between congressional Democrats and Trump.

“Of course we’ll take credit for it, because what he proposed did not fill the bill of what he described,” House Speaker Nancy Pelosi said shortly before the vote, referring to Democrats’ successful pressure on the administration to amend the trade deal to strengthen enforcement of labor and environmental protections.

Earlier Wednesday night, at a rally in Battle Creek, Mich., Trump insisted that Pelosi and other Democrats had no choice but to pass USMCA.

The final trade agreement came with the support of organized labor’s main umbrella group and most business groups — rare for a trade deal under any circumstances.

USMCA has new chapters on areas like digital trade and e-commerce, as well as updated rules on auto production and tougher labor enforcement.

But the more important parts of the agreement may be those that signal a shift away from the long-standing ideology of free trade and toward an embrace of more managed trade. The new agreement has quotas on auto exports, for example, and a provision that allows the U.S. to pull out of the accord if Canada or Mexico should cut a free-trade deal with a non-market economy, namely China.

“You’re trying to manage the trade not only of your own country but of others. It’s an imperialistic form of managed trade,” said James Bacchus, a former Democratic member of Congress and ex-chairman of the appellate body of the WTO.

“The Canadians and the Mexicans,” he said, “have agreed to a lot of these provisions only because they fear the alternative — that President Trump will pull out of NAFTA.”

On the whole, USMCA is not the kind of sweeping, game-changing deal that Trump often boasted he would produce. Indeed, it was quietly negotiated over many months by just the kind of professional economists and diplomats that the president often scorns.

And the negotiations were largely free of the seesawing White House position shifts and Twitter storms that have marked Trump’s trade war with China. Analysts say Trump’s chief trade official, Robert Lighthizer, deserves credit for rewriting the quarter-century old NAFTA and building a broad coalition to get it done.

Mickey Kantor, the U.S. trade representative under President Clinton who completed the NAFTA negotiations in 1993, lauded the Trump administration for updating NAFTA and in particular strengthening enforcement.

At the same time, he was concerned about Trump’s pull away from open trade and the multilateral trading order established under American leadership.

Early on, Kantor agreed, America did give up markets in order to power some countries because it served larger foreign policy interests. But even then, trade policy was about much more than that.

But, said Prestowitz, the approval of the new agreement illustrates how on both the left and right, agreement has grown that the time had come to change U.S. trade strategy.

“This is bigger than Trump,” he said. “When American industry is relatively much less competitive, when we’ve seen a dramatic increase in the gap between the wealthy and the poor and the middle class in the U.S. — all of that was kind of a perfect stew.