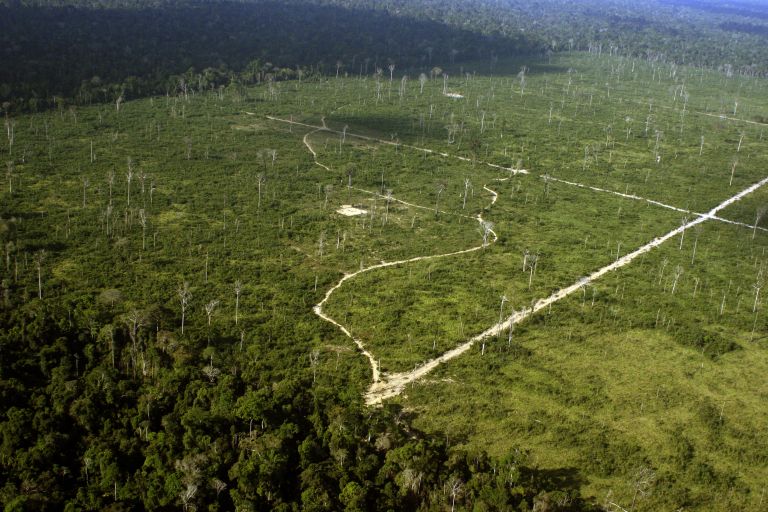 Deforestation in the Amazon to make way for cattle

How free trade hypocrisies are hurting our world

Do you want to be able to trust that the food on your plate is produced without animal cruelty, slavery and dangerous pesticides, regardless of where it comes from? That the wood and paper you buy comes from sustainable and responsible forest management? That the clothes you wear are produced without toxic chemicals and made by workers in decent conditions?

This doesn’t seem like an unreasonable way of organising ourselves. So what’s stopping us from getting there?

The complicated system of world trade is certainly getting in the way.

Right now, trade is dominating the world’s headlines. Donald Trump is throwing his toys out of the cot, threatening and applying tariffs to steel according to his whim. EU leaders reacted to the threats of tariffs by calling it blatant protectionism, even going so far as to say that this wouldn’t happen if only we had agreed the Transatlantic Trade and Investment Partnership (TTIP).

Then, when the EU get the exemption they wanted, the Commission started proceedings for its own safeguard measures to protect its steel market. Free trade indeed…

Those who claim to bow before the free trade gods are all too happy to implement protectionist measures for their own political gains.

Rich countries have made our current trade rules – via both the World Trade Organisation and free trade agreements – and made sure that these rules suit their needs, providing few means for people in poor countries to protect themselves from aggressive export policies. The rules governing global trade policy mean that powerful countries and corporations escape accountability while exploiting workers, small-scale farmers and consumers.

These so-called free trade policies promote rather than stop high-risk commodities like palm oil, and do nothing to address the regular food scandals in the meat and dairy industries. Governments are playing protectionism against free trade in words but not deeds.

One of the biggest examples of hypocrisy is the EU’s common agricultural policy – or CAP – established over 50 years ago and currently under reform. This policy, thanks also to the support of highly protective tariffs and agro-chemical companies, has allowed destructive intensive practices to become the default way European food is produced.

It has short-term benefits, perhaps, for you and me as consumers; food prices are often lower than production costs. But it favours industrial agricultural over small ecological farmers, and there are, frankly, no long-term benefits to be seen. Subsidies and market power are concentrated in the hands of a few massive corporations whose production system depends on routine applications of pesticides and fertilisers and confining massive numbers of animals, often feeding them with soy from a deforested rainforest.

The European Commission is currently negotiating over 20 new free trade agreements. Aside from the Mercosur deal with Latin America – where the meat industry has a dire impact on the Amazon, rural areas, and often threatens Indigenous rights – they want to open up foreign agricultural markets to European goods. This would be to the detriment of local farmers and workers who, instead of growing a variety of local crops for local consumption, would be forced to change to cash crops and monocultures.

So what can we do?

Our individual choices can challenge the status quo, and force things to change. You can check what you buy and refuse to purchase products that come from deforestation – like soy, palm oil, cocoa and other agricultural and meat products. You can actively challenge governments’ decisions to make new trade deals that benefit large multinationals at the expense of our health and environment.

You can write letters to newspapers, vote for politicians who take this matter seriously, launch petitions to bring people’s attention to how the current trade system is unfair; how it’s all about big players and multinationals exploiting others.

We can challenge the myth that we have to choose between protectionism versus free trade, and end the myth that free trade brings any meaningful benefit to the average consumer. For more information about the trade we want, click here.

Shira Stanton is a senior political strategist at Greenpeace International

For all hyperlinks, read the article on original page