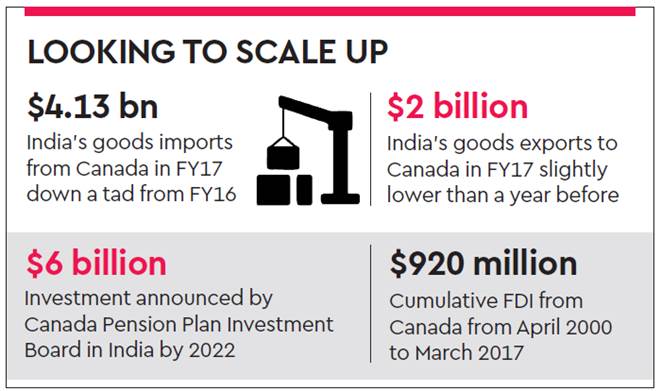 After a gap of more than two years, India and Canada will resume formal negotiations this week for a free trade agreement (FTA) in goods and services, while talks on a bilateral investment agreement are being handled separately, sources told FE. The tenth round of negotiations for the FTA, known as the Comprehensive Economic Partnership Agreement (CEPA), will start on Monday. The move signals an intense engagement at a time when bilateral trade is running below potential and several Canadian companies, including Canada Pension Plan Investment Board, have either announced multi-billion dollar investments in India or stepped up focus on the country. The talks on the FTA include mainly goods and services trade while investment aspects are covered separately under a bilateral Foreign Investment Promotion and Protection Agreement (FIPA).

Finding some common ground on Canada’s ambitious demand for concessions such as “MFN (most favoured nation)-forward” and “ratchet” from India under the FTA could be the aim of the negotiations. These demands, along with a regime change in Canada following elections in 2015, had contributed to the slowdown of the pace of negotiations earlier. Offering ‘MFN-forward’ will mean any concession given by India to a trading partner in future under a bilateral treaty will automatically get extended to Canada.

Similarly, ‘ratchet’ suggests benefits arising out of India’s domestic policy changes in future will have to be provided to Canada as well. Last year, India had asked Canada to state in which sectors the latter wants “MFN-forward” and “ratchet” before it started examining the possibility of offering any such concession. India feels offering “MFN-forward” in all sectors could be counter-productive, as concessions under each FTA are based on attributes peculiar to that particular partner, which shouldn’t be extended to others. Similarly, it fears that agreeing to “ratchet” could affect its own domestic policy space in future.

Although Indian goods exports to Canada are less than 1% of its total outbound shipments, a joint study before the FTA talks started in 2010 had estimated fairly symmetric gains for both the nations. Annual export gains for Canada were estimated to range between 39% and 47%, and for India, between 32% and 60%. India’s goods exports to Canada stood at $2 billion last fiscal, marginally lower than a year before, while its imports from that country were to the tune of $4.13 billion.