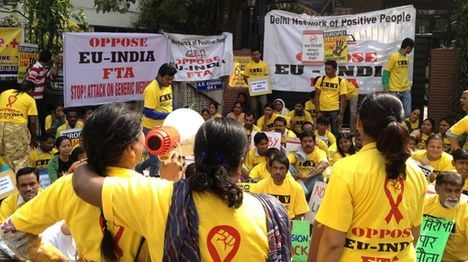 Chief negotiators of India and EU today took stock of "outstanding issues", including duty cut on automobiles and movement of professionals, that have held up talks on the proposed free trade agreement (FTA).

After that meeting, India would take a decision "on how we would like to proceed. So we will take a call when that meeting is scheduled... We are keen to go ahead and work towards a balanced agreement," she told reporters.

The purpose of the meeting was to assess where both sides stand and how India and the EU should go forward with the proposed pact, officially dubbed as Bilateral Trade and Investment Agreement.

Since the talks stopped, she said, India has moved ahead on many issues such as permitting 49 per cent FDI in insurance, 100 per cent FDI in telecom and easing of foreign investments norms in the banking sector. EU had demanded these steps in the proposed agreement.

"So these have been the changes between 2013 and now. In addition to that, we have now a model Bilateral Investment Treaty approved by the Cabinet and that forms the basis on which investment discussions can also go on," she said.

The secretary said, at the meeting, both the sides flagged the outstanding issues including the duty cut demand of the EU on automobiles, wines and spirits.

"Today there was a discussion on most of the outstanding issues. Our intention is to work towards a balanced agreement. The EU flagged their outstanding issues and would now take stock and decide how to proceed on this," Teaotia said.

The Indian side raised the issue of data security status, Mode-IV ceilings (movement of professionals), seamless intra- corporate movement and real market access in terms of sanitary and phyto-sanitary (norms related with plants and animals); and technical barriers to trade measures adopted in EU.

"So there is a work to be done yet. The negotiations will proceed once a decision is taken on whether there is enough ground to move ahead. We are very positive," she added.

The talks were expected in August last year, but they were deferred by India, expressing disappointment and concern over the EU banning sale of around 700 pharma products, clinically tested by GVK Biosciences.

On this issue, Teaotia said: "There has been a progress ... As we speak, our delegation is already in Brussels and there is a meeting (going on) between the regulators to discuss the GVK matter".

In May 2013, India and the 28-nation bloc failed to bridge substantial gaps on crucial issues, including data security status for the IT sector.

The negotiations for the proposed Broad-based Trade and Investment Agreement have witnessed many hurdles with both sides having major differences on crucial issues.

The issues include easy movement of professionals and data security status demand from India. Besides demanding significant duty cuts in automobiles, EU wants tax reduction in wines and spirits and dairy products and a strong intellectual property regime.

The free trade pact is aimed at reducing or significantly eliminating tariffs on goods, facilitating trade in services and boosting investments between the two sides.