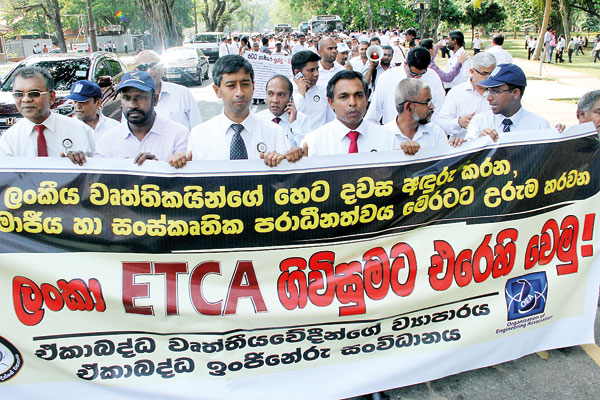 COLOMBO: Negotiations between India and Sri Lanka on an Economic and Technical Cooperation Agreement (ETCA) hit the hard road at an officials-level meeting held here on January 4 and 5.

Informed sources told Express that the Sri Lankan side was pressing the Indians to make certain concessions explicitly to enable it sell the pact to the Sri Lankan masses who tend to imagine that ETCA would be a rank give away to the Big Brother across the Palk Strait.

The Indian side resisted these moves on the grounds that trade pacts are too serious, too far reaching and wide-ranging in their impact to be tailored to suit short-term political requirements.

However, the Sri Lankan side had good reasons to pursue a political goal. Even as the talks were on in the city, posters against ETCA, describing it as “aggression”, appeared in parts of Central Colombo. At any rate the Sinhalese language slogan “ETCA EPA” (No to ETCA) has caught the imagination of the people.

With the opposition, led by former President Mahinda Rajapaksa, backing the anti-ETCA campaign, the pact is expected to be an issue in the forthcoming local bodies and provincial elections scheduled for June-July and September respectively, unless it is tailored to suit the electoral agenda of the ruling coalition.

But tailoring it to an electoral agenda might mean India’s giving in to Sri Lanka in ways which could adversely affect the interests of its own private sector. This aspect has to be borne in mind as the primary driving force in the liberalized Indian economy is the private sector.

There were differences over priorities. The Sri Lankan side lay great stress on correcting the flaws or removing the irritants in the Free Trade Agreement (FTA) which became operational in 2000. The Sri Lankan side has been seeking the removal of a plethora of Non Tariff Barriers (NBTs) which impede the entry of Sri Lankan goods into the Indian market. Sri Lankans feel that if the NTBs are not there, the trade gap would not be as big as it is now.

But the Indians have had difficulty in removing many of the NTBs. Or, as the Sri Lankans allege, they have been tardy and reluctant.

At official level trade talks, the minutiae tend to get a lot of attention. Discussions take place over every sentence and paragraph and the order in which they are written. It is said that the Sri Lankans wanted some things to be stated not only in the introductory statement but also in the main body of the agreement as a clause which the Indians resisted.

Above all, there were differences over the time period to end the negotiations and sign the pact. Not having been able to sign it by December 2016 to time with the second anniversary of the Sirisena regime, the Sri Lankans wanted the talks to be wrapped up fast by mid 2017 before the local bodies and provincial elections. But the Indians would not be hustled as trade talks are complicated affairs and take years to conclude internationally.

India was not averse to holding meetings often, say once in a month, but it was against rushing through as both sides have vital interests to be safeguarded or pursued. As the Indian Commerce Minister Nirmala Sitharaman said during her visit to Colombo last year, both India and Sri Lanka have concerns, interests and issues to address, and that India is not in favor having a strict timeframe to wrap up the talks.