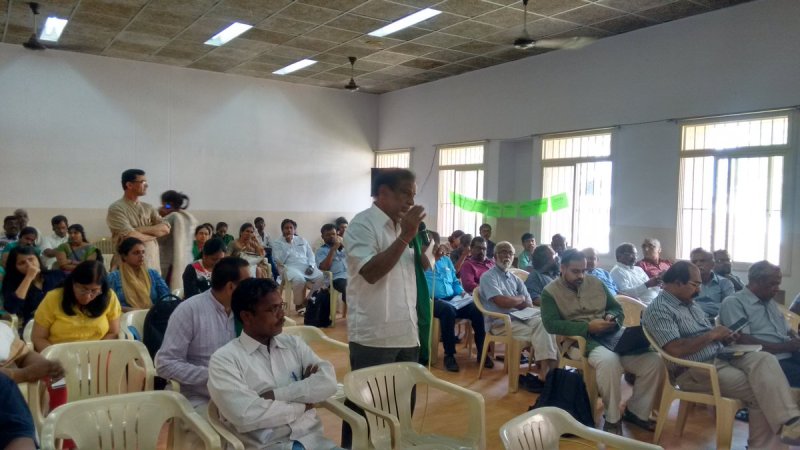 At a meeting organised by Karnataka Rajya Raitha Sangha (KRRS), La via Campesina, IT for Change, Forum Against FTAs, and other local groups, around 100 representatives of people’s movements from southern Indian states gathered at the Indian Social Institute, Bangalore from 2-3 April to discuss the implications of the proposed mega free trade agreement - Regional Comprehensive Economic Partnership (RCEP).

They represented a wide range working on health, agriculture, labour rights, financial and public services. The groups questioned why the Government of India is agreeing to be part of the RCEP, which allows foreign investors to sue governments, restricts policy space for governments, threatens access to life-saving medicines and puts seed sovereignty at risk.

“Farmers in India have already borne the brunt of existing FTAs such as the ASEAN-India FTA and India Sri-Lanka FTA. Cheap imports of palm oil, pepper and tea have devastated lives of peasants across South India. The RCEP will further aggravate this crisis. We reject the RCEP outright,” said KT Gangadhar, President KRRS.

Burnad Fatima of Asia Pacific Forum on Women, Law and Development (APWLD) added, “Women-led subsistence-based agriculture guarantees food security and nutrition of their communities. But RCEP negates this and invites foreign investors to plunder the sovereign status of women farmers, stopping them from sharing and any traditional and indigenous knowledge, and allowing corporations to take over common resources like water, forest and land. Women from the margins – rural poor, Indigenous and Dalit women are the worst affected. We resist and say ’No RCEP’."

As the Indian Government prepares to host the 19th round of RCEP negotiations in Hyderabad in July, civil society are concerned that India’s federal decision-making process - whereby state governments’ considerable autonomy over policies in agriculture, health, education and labour - will be compromised by India’s commitments in the RCEP and the process by which it is being negotiated without consultation with State capitals, leaving aside people. The agriculture minister of Kerala, Sunil Kumar has already written a letter to Prime Minister Narendra Modi in this regard.

Participants expressed concern that the investor state dispute settlement (ISDS) provisions in the proposed agreement will undermine the Indian government’s ability to protect citizens’ human rights over corporate profits. ISDS allows foreign investors to sue the government for millions of dollars. They file these legal claims before handpicked arbitrators by-passing domestic court. India is already facing many such arbitration suits.

"The presence of international healthcare companies is increasing in India, evident in the presence of companies like Malaysia’s Columbia-Asia and the Singaporean IHH Health Berhard. Foreign investment in the sector is also increasing and grew at 27 per annually in the period between 2010 and 2014. Close to 80 per cent of this was equity investment. Entering into an agreement (like RCEP) that will curtail the government’s ability to regulate the private healthcare sector and strengthen the so-called rights of investors will impact both workers and patients.” V. Narasimhan, India country representative, Public Services International.

Anand Grover, senior lawyer and former UN Special Rapporteur on the Right to Health pointed out, “India supplies cheap generic medicines across the developing world. Japan and South Korea are demanding strict patent laws that will raise the cost of affordable medicines which will impact patients in India and developing world.”

"Affordable medicines from Indian generics helped in making HIV treatment available to nearly 17 million patients worldwide. Today, people living with HIV are facing increased mortality rates because of co-infection with Tuberculosis or Hepatitis-C. There is a lack of access to new medicines to treat these diseases because of patent monopolies resulting in high prices or regulatory barriers. We are worried that the heightened Intellectual Property provisions being negotiated in RCEP, if accepted would further extend monopoly protection beyond what is required and keep medicines out of reach for us for a longer period of time," added Firoz Khan, National Coalition of Positive People on India (NCPI+).

The two day meeting discussed the impact of RCEP and free trade agreements on agriculture, manufacturing, essential services including access to medicines, banking and insurance and digital economy. The rights of people versus investor protections were discussed as were strategies to mobilise against RCEP. The groups called for an unequivocal rejection of RCEP.