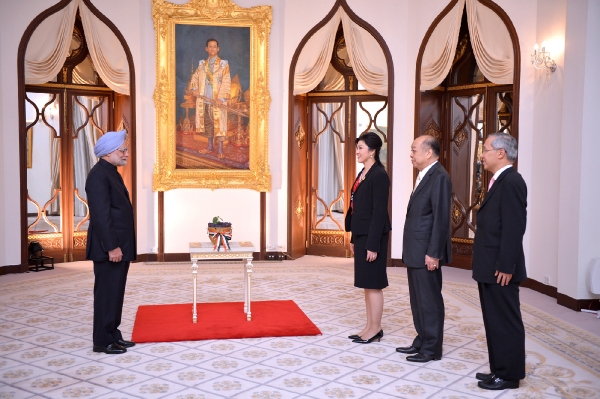 Bangkok, May 30 — Emphasizing that India and Thailand stand to benefit from increased trade, the prime ministers of both countries Thursday directed their respective commerce ministers to work out the India-Thailand Free Trade Agreement (FTA) "at the earliest".

Senior officials said here that the FTA could be in place before October, reflecting the seriousness of both the governments.

Stating that the trade and investment levels between both countries were yet to reach their full potential, Prime Minister Manmohan Singh, who is on his first bilateral visit to Thailand, said: "We have directed our ministers to quickly resolve the few outstanding issues to achieve a comprehensive and balanced India-Thailand Free Trade Agreement at the earliest."

Secretary-east Ashok Kanth said that both the prime ministers directed their commerce ministers "to take charge" and get the comprehensive FTA in place "preferably by October this year".

"There is a strong commitment on both sides to take this relationship forward," Kanth said.

The commerce ministers have been asked to resolve all pending issues to make way for the FTA.

"The prime ministers advised their respective negotiators to show the required flexibility in concluding the long pending negotiations to give a further fillip to the bilateral trade which has shown healthy growth even during the current economic slowdown," the joint statement by both the prime ministers said.

"We would like to see enhanced presence of Indian and Thai companies in each other’s markets, especially as both countries are planning massive investments in infrastructure over the next five years," Manmohan Singh said.

India will work together with Myanmar to ensure completion of the trilateral highway project by 2016 and pursue development of other corridors, he added.

Manmohan Singh complimented Thai Prime Minister Yingluck Shinawatra "for the momentum that she has imparted to our relationship".

Last year (2012-13), bilateral trade between Thailand and India crossed $9.2 billion. Over the past five years, trade increased at over 15 percent per annum.

"We have just completed a very meaningful, productive and satisfying discussion on bilateral, regional and global issues of common interest. We have agreed to maintain the momentum of regular high level dialogue. In the coming months, India’s defence minister, commerce and industry minister and external affairs minister will be travelling to Bangkok," he stated.

"We are neighbours, linked by millennia-old ties of culture and civilisation. Our cooperation is growing in multiple dimensions - in defence and security, trade and investment, science and technology, education, culture and tourism - and each area holds enormous potential," he said.

The prime minister said Thailand was "the springboard for India’s engagement with Southeast and East Asia and remains the vital link in our Look East Policy and our strategic partnership with ASEAN".

He said the signing of the extradition treaty and a memorandum on cooperation in anti-money laundering and terrorism financing would send a "major signal of our shared commitment to combating terrorism, organised crime, drug trafficking and counterfeiting".

Manmohan Singh said both countries had agreed to continue strengthening defence relations, including through exchanges, exercises and joint patrolling.

"Today we have taken one more giant step in pursuit of closer cooperation, stronger connectivity and greater commerce. We have resolved to strengthen our bilateral engagement and advance maritime security in our region," he said.