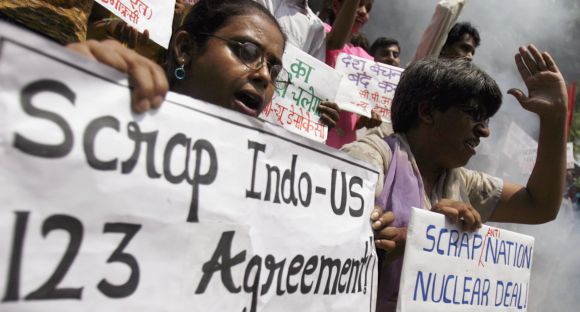 On the occasion of the Prime Minister, Dr. Manmohan Singh’s visit to the USA, where he is supposed to discuss a Bilateral Investment Treaty (BIT) between India and the US, the Forum against FTAs, a coalition of over 75 organisations, farmers groups, trade unions and development activists, calls upon the Prime Minister to review and rescind its decision to engage in this damaging treaty.

In a 4 page open letter (attached) to the Prime Minister, the Forum expresses its serious concern over government of India’s policy on investor protection provisions in Bilateral Investment Treaties (BITs). The Forum argues that such a treaty with the US will include Most Favoured Nation (MFN) status to US investors under international law standards, provisions such as no expropriation without due process and full compensation and withdrawal of conditionalities such as domestic content requirement, export performance and regulations on financial transfers from such investments.

Sources also suggest that the US government would expect pre-investment protection i.e. providing market access even before the actual investment. Not only does this mean a shift in stance from India’s earlier BITs, it will make an independent and nationally determined FDI policy impossible to pursue.

The letter in particular stresses the severely adverse impact of the investor-state dispute settlement clauses under such investment agreements that allow foreign investors to sue national governments in secret cases at international arbitration tribunals. These include paying out compensations, damages and court fees often in millions of dollars, and as a result, the freezing of future policy space. These clauses choke the space for development friendly policy and regulation spanning areas such as financial policy for economic crisis management, environment, public health, rights of marginalised groups, natural resource use and conservation and so on.

"India’s current obligations under various BITs have systematically undermined the government’s policy space and even the powers of the Parliament and Judiciary. Hence, any agreement on investment agreement with the current model is a dangerous path to follow", said K. M. Gopakumar, Senior Researcher and Legal Advisor with Third World Network, a leading NGO researching on global policy issues.

India’s experience in the past with US investors, for example, the whole episode of Enron which occurred in Dabhol Power Corporation already establishes a concrete case against investor protection. In the second case that India lost under BITs provisions, is the M/s White Industries Australia Limited (WIAL) case, Australia, where Coal India Ltd paid Australian dollar 98,12,077 (apprx INR 531,502,000) to the investor. The Government of India has received around eight notices from foreign investors threatening to invoke investor state arbitrations under various investment agreements India signed since 1995. Various reports suggest that international arbitrations against India to the tune of over $ 5 billon are in process. A number of companies and foreign investors, such as the Devas Group and Axiata from Mauritius, Deutsche Telekom, Germany, Sistema and Bycell from Russia, Telenor Asia, Singapore, have either launched or threatened to launch international arbitrations processes against India.

The Forum also highlights that in recent times foreign investors around the world are increasingly resorting to investor-state arbitration and holding sovereign governments to ransom. According to UNCTAD, the total number of treaty based cases reached 514 in 2012. At the same time in 2012 alone 58 new cases were initiated, ‘which constitutes the highest number of known treaty-based disputes ever filed in one year’. In 66 % of cases respondents are developing countries while 61% of cases originate from investors in developed countries.

This treaty is unwarranted at this time when the Shri Namo Narain Meena, the Minister of State, Ministry of Finance, has stated in the Parliament that India has initiated a review of its bilateral investment agreements and also declared a moratorium on new negotiations of BIT.

"At a time when India is officially reviewing its existing bilateral investment treaties, it would be premature on the part of New Delhi to advance the negotiations with the US on the India-US BIT. What if the internal review concludes that India should not include investor-to-state dispute settlement mechanism or include a restricted most favoured nation clause? Both the trading partners should not prejudge the outcome of the ongoing review", argued Kavaljit Singh, Director of Madhyam, a public interest research and advocacy organisation based in New Delhi.

In the light of these concerns, “the Forum asks the government to; put on hold all negotiations of investment protection agreements including the BIPA with US; appoint an independent commission to conduct comprehensive assessments from a development perspective and make publicly available the information related to investor-state disputes and compensation/damage paid to investors as a result of arbitration awards under various investment protection agreements”, said G. Manicandan, Coordinator, Forum against FTAs.